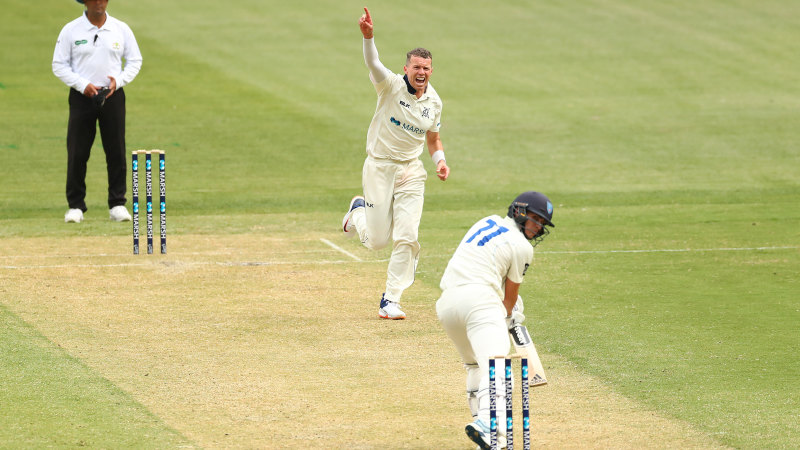 Pattinson and Siddle claimed two wickets each but either man could easily have had a bag such was the potency they showed.

Curator Matt Page has now produced two surfaces bearing little semblance to the wickets of recent years, which have led to dour and, to be frank, boring cricket.

The five days of Shield cricket on the re-cast MCG pitch has now yielded 1142 runs at a cost of 25.4 per wicket.

On a deck that Siddle said was sporting more even grass coverage than last year, there was bounce, carry and movement off the seam for the fast men.

Peter Nevill and Sean Abbott, who fought back for the Blues with an unbeaten 74-run stand for the seventh wicket, repeatedly played and missed to the second new ball in the final hour before stumps.

There was also assistance for the spinners, with left-armer Jon Holland given spells while the ball was still shiny.

In an indication of the extra pace in this season’s pitch, five of the first six batsmen to fall were to catches behind the wicket, and there were two slips and a gully deployed by the Vics for much of the day, even to the ageing ball.

Previously here, it had not been uncommon to see umbrella fields in front of the batsmen due to the benign conditions.

“Someone joked when they came back in at lunch that’s the first time at the ‘G for a very long time we didn’t employ a mid-wicket for the first session,” Siddle said.

“They’re all promising signs with how the wicket’s been after one game and five days of cricket.
This wicket has improved on the last one.”

Two factors here, though, should be considered. NSW’s top six is extremely green with three players in their second, third and fourth first-class games, and the Kookaburra ball being used here is different to that which will be used in the Test.

This new red Turf ball has a prouder seam and an extra coat of lacquer with the aim of offering more lateral movement in the air and off the pitch. Siddle, however, downplayed the significance of the ball.

Siddle said Pattinson, who has not been picked in the first two Tests this season, was bowling well despite his lack of recent game time.

“He showed today he had pretty good rhythm,” Siddle said. “He bowled a lot overs early on and looked good. He’s in a good place. It’ll be a good hit out this game.”

“For me, I always had this thing that the skill of the musician is to …