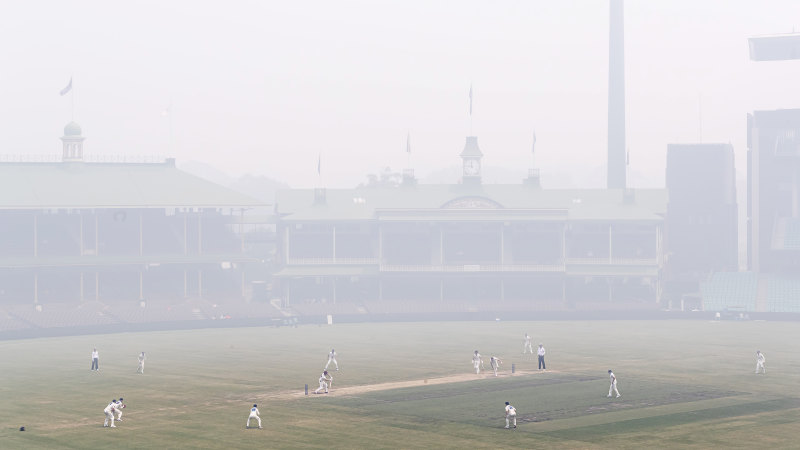 After talks with CA, the ICC is to be made aware of any players with asthma or related respiratory issues so that they can be watched more closely while Australian team doctor Richard Saw, who will oversee both teams, will report any medical problems to match officials.

The ICC has guidelines around air quality and pollution: a reading of 300 on the PM2.5 index, which measures dangerous small particles that can enter people’s lungs and the bloodstream, is regarded as at the “hazardous” level. The AIS considers a reading of 150 as hazardous for high-intensity exercise while according to NSW Health it crosses that line at 200.

However, it’s been decided such air quality index ratings, which are published on the NSW Health website, will not a major determinant in assessing conditions at the SCG because of concerns they are only produced as a 24-hour rolling average. An hourly visibility score provided by the site for the Randwick area will be given more weight but it will be down to the discretion of match officials to take players off the ground if they see fit.

“Even the hourly measures are probably not that useful to be honest because they’re still an hour behind. We want to know what the measure is right now. But in reality what we’ve seen is when it’s looked bad, it’s been well over the cut-off score. Essentially, we’re going by how it looks and how the players are travelling from a medical perspective.”

Already this summer, a Big Bash League game in Canberra has been abandoned while the fourth day of a Sheffield Shield match between NSW and Queensland at the SCG was played in what NSW spinner Stephen O’Keefe described as “shocking” and “toxic” thick smoke, which reached 170 on the air quality index.

While the scenario is different this week as it is a match controlled by the ICC, Kountouris is confident all officials are on the same page when it comes to protecting players.

“When it’s really bad I think everyone gets it,” Kountouris said. “In Canberra, pretty much everyone knew they had to come off the field for that Big Bash game. There is obviously that grey zone where it’s getting bad, and if it stays like that, just a bit hazy, that’s where you need the numbers or communication about how players are feeling.

“I can’t speak for Richie Richardson, what he’s going to do. It’s up to them when they suspend, if they don’t suspend, whatever they do.”

Australia vice-captain Travis Head said decisions on play being suspended were “something we don’t have to worry too much about”.

“Player safety is obviously an aspect of it but I’m sure the match officials, seeing what happened in Canberra a couple of weeks ago, I’m sure they’ll put us in the best position and we won’t have to worry about it too much,” Head said.

“It’s not a concern for me, it’s probably more a concern around it’s just a game of cricket, I guess – there’s a lot more people being worse affected than us. Our thoughts with them, we’ll just play the game as best fit for our health and safety I guess and we have all the confidence in the world in all our match officials.”

New Zealand fast bowler Neil Wagner is also taking the prospect of playing in haze in his stride. “Wherever you go around the world, you’ve got to adapt to conditions and things around you, [no matter] how tough they might seem,” Wagner said.