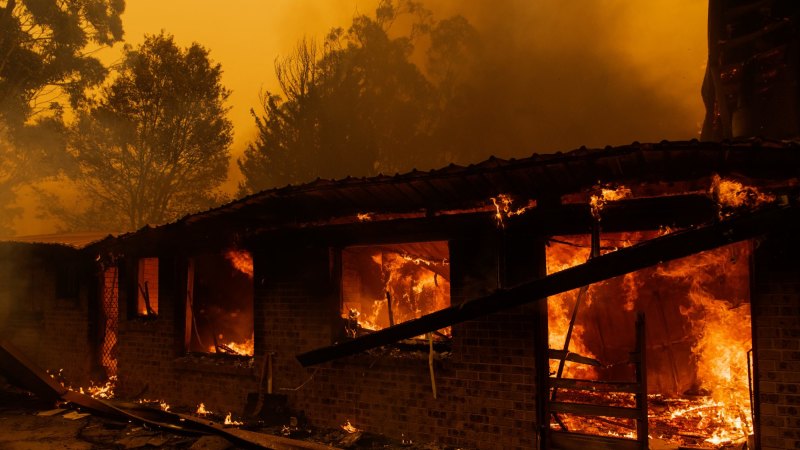 But the Morrison government is also facing calls for a bigger expansion in military intervention by mobilising soldiers to create fire breaks and using the Royal Australian Air Force to douse fires.

Prime Minister Scott Morrison spoke to General Angus Campbell, the Chief of the Defence Force, on Tuesday to confirm all requests for help in NSW and Victoria would be met with no impact on any other part of Australia receiving support.

One ship, HMAS Choules, is an amphibious landing ship with a dock for helicopters and the capacity to carry 700 troops at maximum load. The second, MV Sycamore, is a patrol vessel that can carry one helicopter.

Both ships will sail to East Gippsland, the region that includes Mallacoota, where thousands of people were forced to take shelter on the foreshore on Tuesday, with HMAS Choules sailing from Sydney and being available to relieve towns on the South Coast of NSW if needed.

The helicopters include a tandem-rotor Chinook for heavy lifting, two Black Hawks and one Taipan naval helicopter.

These will join two C-27J Spartan battlefield airlifters at the Royal Australian Air Force base at East Sale on New Year’s Day, making them available to assist nearby towns such as Mallacoota.

Defence personnel are already refuelling aerial tankers at RAAF bases, providing vehicles and drivers for search and rescue operations, serving meals to firefighters, providing accommodation for volunteers and mapping fires from the air.

HMAS Choules is expected to take 72 hours to reach the coast off eastern Victoria while the smaller MV Sycamore will be in the region within 48 hours.

The deployment came after Victorian Premier Daniel Andrews called for more defence assistance on Tuesday, prompting hours of talks between emergency services leaders and defence chiefs over the scale of the operation.

Mr Morrison told Australians in a video message on Tuesday the Commonwealth would continue to back the “tremendous response” by the states.

“These fires have been well responded to by our state jurisdictions and they’re supported also by the Commonwealth, particularly through the Australian Defence Force,” he said. “You can expect that support to continue for as long as it is needed.”

But the Prime Minister is facing calls for a much greater expansion in military intervention by mobilising soldiers to create fire breaks and using the Royal Australian Air Force to douse fires.

Opposition Leader Anthony Albanese called for greater use of the military and an urgent meeting of state and federal leaders at a Council of Australian Governments (COAG) to discuss the bushfire emergency – an option Mr Morrison has turned down so far.

“We should be using all the resources at our disposal, and one of those is the ADF,” Mr Albanese said. “They need to be deployed in a way which assists the process. And of course, the ADF aren’t the firefighting experts, but they do have skills.”

Mr Albanese said it was “unacceptable” for Mr Morrison to argue that COAG did not need to meet until March.

In the most detailed call for greater defence assistance, Labor MP Mike Kelly said the ADF should play a greater role when Australia could not rely as much on aircraft or other firefighting equipment from the US and Europe.

“Under supervision, there are things we could usefully employ the ADF to do, such as cutting fire trails, assisting with evacuations and logistics support, and helping with the use of heavy plant,” he said.

“It could assist with bulk water carriers. All of that could be very useful and I’m getting this feedback directly from firies on the ground.”

Mr Kelly, an army officer for two decades before he entered Parliament in 2007, said he was hearing from volunteers who were “buggered” after working for six weeks, compared to a previous record of four weeks.

Mr James, who served in the ADF for 45 years and has volunteered with the NSW Rural Fire Service for seven years, said troops could be used in a flood to lay sandbags but did not have the training for front-line firefighting.

“This is one area where social media and commentators have not only got it wrong but are making it worse,” he said.

Mr James said land-clearing operations were best done by local councils with staff who knew the area rather than troops flown in for the job.

He also said Australian fires, with oil and vapour from eucalypts creating intense heat and flame, were best fought with the jets already used by fire authorities rather than RAAF aircraft such as the Hercules.

Previous Bali pigs to miss out on airline meals
Next South Australia fires expected to merge, fears of homes lost in Tasmania