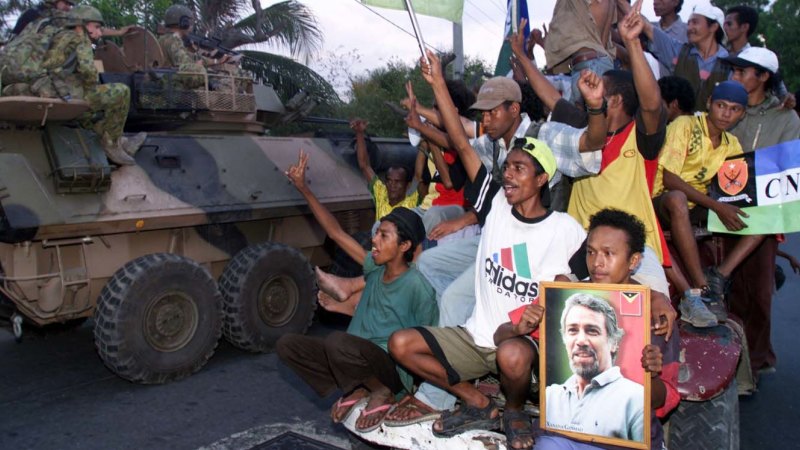 Professor Clinton Fernandes, a Timor-Leste expert from the University of NSW, said Indonesia had brutalised the country during both its occupation and exit. “The devastation inside Timor was unbelievable,” Professor Fernandes said. “The economy had been reduced to the 1920s.”

Australia took in one group of about 1500 Timorese in 1999 who had been sheltering in the compound of the UN Assistance Mission in East Timor.

But the cabinet documents show the Howard government was asked by the UN to allow in another 1500 people who had been “identified by the UN High Commission on Refugees as being at gravest risk because of their pro-independence affiliations”.

Mr Ruddock’s briefing said the group, who were aligned with the pro-independence umbrella group the National Congress for the Reconstruction of Timor (CNRT), would be costly to relocate.

“The nature of the CNRT group would also require more rigorous character checking, given the potential for false identities or non-bona fide nominees being planted among genuine evacuees,” Mr Ruddock’s briefing paper says. It notes two of the previous 1500-odd evacuees had “required particularly close scrutiny”.

Instead of accepting the evacuees, the government recommended they be sent back to East Timor from Indonesia, where many of the group had been studying before revealing their pro-independence affiliation.

Australia has long played an influential and controversial role in East Timor. It did not oppose Indonesia’s invasion in 1975 and granted legal recognition to Indonesian rule of the country in 1979.

In 1998, after the fall of the Suharto dictatorship, then prime minister John Howard wrote to Indonesian president B.J. Habibie, urging him to give the Timorese autonomy and a path towards a vote on self-determination.

When East Timor voted for independence in 1999 and violence erupted, Australia led an international peacekeeping force.

But Professor Fernandes said that decision came only “under a tsunami of public pressure and outrage” because Australia still wanted to maintain a good relationship with Indonesia.

Howard government treasurer Peter Costello said at the release of the cabinet documents that Australia had been afraid East Timor could become “an impecunious state on its border that could be subject to instability and penetration” but that independence “worked out ultimately in the interests of the East Timorese people”.

An official history of Australia’s peacekeeping operations in East Timor has been bedevilled by claims the federal bureaucracy is trying to censor its contents.

Previous US troops fire tear gas at pro-Iran protesters in Iraq
Next ‘It can be more controversial’: Costello warns on constitutional recognition for Indigenous Australians