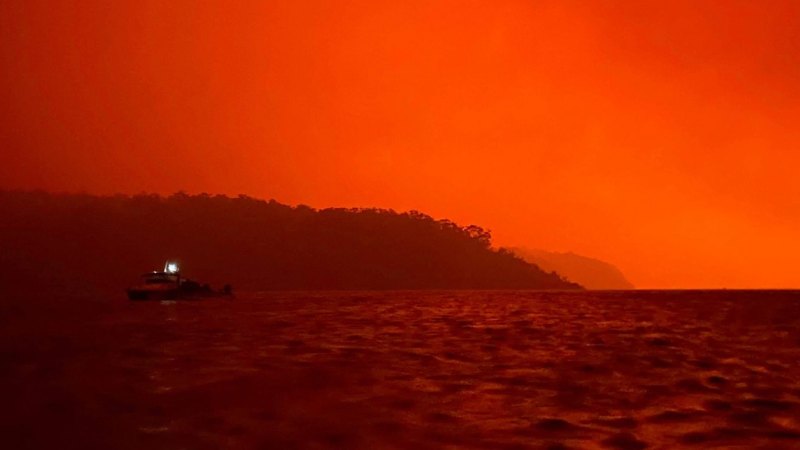 The most dangerous conditions for fires extending over Victoria’s east and NSW’s south-east coastal areas are forecast for Saturday.

NSW Premier Gladys Berejiklian on Thursday declared a state of emergency ahead of the worsening conditions, while emergency services warned isolated communities in Victoria’s Upper Murray and Hume regions, as well as people in NSW’s Kosciuszko National Park, to evacuate by Friday.

The hot temperatures and dangerous winds will extend to the NSW Central Coast and across the Hawkesbury and Blue Mountains districts, where the Gospers Mountain mega-fire continues to burn.

The dry northerly winds will come ahead of a cool change from the south, bringing south-westerly winds up to 50km/h to coastal and Alpine areas.

Last week, a low-pressure system from the Southern Ocean moved north and collided with a high-pressure system on the NSW coast. The two systems forced hot, dry air from inland Australia out towards the coast, resulting in strong westerly winds for days, before an abrupt southerly change sent firefighters scrambling to tackle new fire fronts.

Shifting winds will create a wildcard for firefighters by extending the fire front or driving it in new directions.

The southerly change will bring a drop in temperatures on Sunday, down to 10 degrees in Alpine areas of Victoria and NSW and mid to low 20s on the coast. Small amounts of rain – up to 5 millimetres on the coast and 5-10mm in the High Country – are expected.

Bureau of Meteorology senior forecaster Jenny Sturrock said the dry conditions were “extremely challenging” and forecast rainfall would not be enough to dampen the fires.

“It’s very dry and each change and hot air mass, as it moves over, just adds to the situation,” Ms Sturrock said. “Wind changes make fires difficult to control and we will get some erratic winds with the southerly change, which adds to the complexity and risk of the situation.

“The rainfall won’t be enough to be of significant help but as the winds drop after Saturday and the temperatures cool, that could assist firefighters to get into the firegrounds and control the situation.”

Ms Sturrock said the short-term forecast beyond the weekend was not favourable.

“Unfortunately, there’s not a lot of rain expected to make a dent in extinguishing these fires and that leaves them vulnerable to a combination of hot air and wind change,” she said. “The models are predicting that around Thursday next week [there’ll be] another surge of hot air.”

Previous ‘Get out now’: Desperate tales from epicentre of an unfolding emergency
Next Australia’s climate policies will protect environment and ‘seek to reduce’ hazard of fires, says Prime Minister