Larkin and Stoinis help Stars knock Thunder off their perch 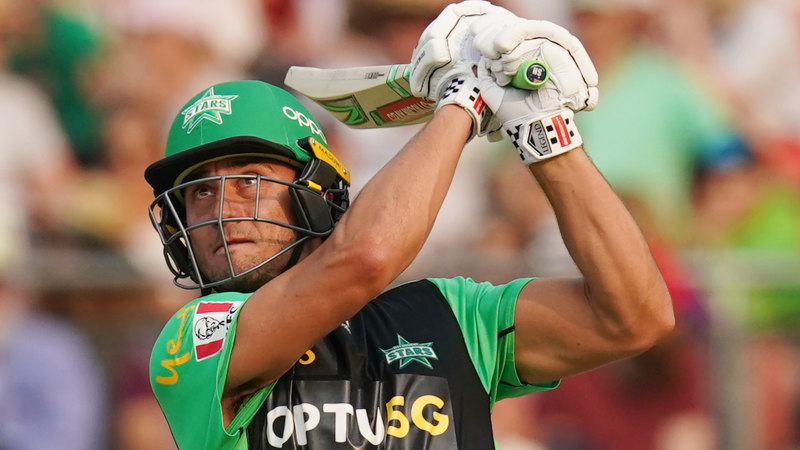 A member of the NSW Sheffield Shield side, Larkin notched his first Big Bash half-century and showcased his talents as he bounced back from a duck against the Hurricanes on Monday.

Sams and Nathan McAndrew both took two wickets in consecutive deliveries to strike fear into the Stars’ dugout before Peter Handscomb and Adam Zampa finished the job with two balls to spare.

It was the Stars’ fourth win from five matches and puts them one point clear at the top of the table.

“It was a fraction tense,” Larkin said. “We made it harder than we should have but I think we were always going to find the few runs we needed.

“If we could just wrestle our way on top of the game we could find a way to win it. If it hadn’t been me it would have been Maxy or Pete to do that job.

“It’s nice to come home and do well against a bunch of blokes I know really well.”

Earlier in the afternoon, Glenn Maxwell’s decision to take the new ball proved to be a masterstroke as the Stars captain knocked over Alex Hales for a third-ball duck and the in-form Usman Khawaja for just one in the next over.

“You can’t understate how much that puts you on top of the game to knock over two of the better batters in the competition,” Larkin said.

The competition’s leading run-scorer, Callum Ferguson, looked sharp before gliding a ball down to Zampa at third man – a shot the Thunder skipper will be kicking himself about as it left his side in a precarious position at 3-39.

Dale Steyn went wicketless (0-24 off four) but was rather unlucky in his second over. Not only was Matt Gilkes trapped in front but not given out, wicket-keeper Handscomb dropped a relatively simple chance to his right with Alex Ross on two. Ross ended up top-scoring with a handy 40.

The home side chipped away in the middle overs yet were unable to really put the foot down and seriously lift the run rate. There was no better example when Gilkes deviated from his plan to keep the ball mostly on the ground by holing out at long-on for 28.

There was a big cheer at the stadium when No.7 Sams got off the mark. The all-rounder had not scored a run in the tournament from four previous innings and would have breathed a sigh of relief to get up the other end before his knock of 13 off 16 balls ended trying to hit Haris Rauf over the blue mountains.

Some clever late batting from Arjun Nair, who finished unbeaten on 17 off 11 deliveries, helped the Thunder to a moderate total on a slow drop-in pitch.

Rauf was the pick of the bowlers with 3-24 from four overs, while two late wickets from Sams (3-25) added excitement to what looked like a cruisy run chase.

The Thunder have a four-day break before facing the Heat in Brisbane, while the Stars will line up against cross-town rivals the Renegades on Saturday.