Labuschagne finds the gaps to fill one left by usual talisman

admin January 3, 2020 Sport Comments Off on Labuschagne finds the gaps to fill one left by usual talisman 77 Views 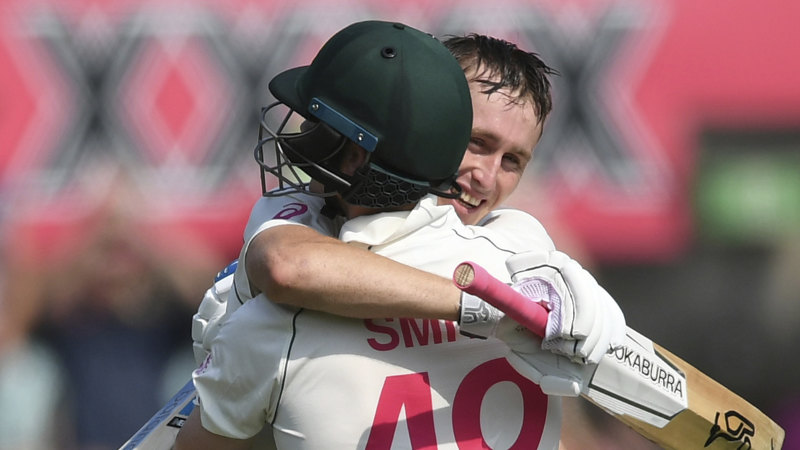 New Zealand eventually reeled Smith in again, mostly due to his determination to avoid risk and Neil Wagner’s short-leg theory, which seemed crafty two weeks ago but is now bordering on dismal.

It was not New Zealand’s day, or, to be precise, it was not their day-after. A mystery bug picked up over the new year had wiped Kane Williamson, Henry Nicholls and Mitchell Santner from their team sheet. Suzie the waitress was mentioned, but she is on duty with the England camp in South Africa.

Whatever got into the Kiwis robbed this game of much of its competitive potential before it started. In a cruel succession of blows, they lost six players with a collective 11,000 Test runs and 600 wickets. Imagine Australia without Smith, David Warner, Pat Cummins, James Pattinson, Nathan Lyon and Josh Hazlewood, and see how they go.

A possible home team, in those circumstances, would be Joe Burns, Usman Khawaja, Labuschagne, Travis Head, Matthew Wade, Kurtis Patterson, Tim Paine, Mitchell Starc, Michael Neser, Mitchell Swepson and Jackson Bird. Perhaps, for the sake of a contest, it should be.

To add insult to illness, New Zealand rested Tim Southee and gave the new ball to Colin de Grandhomme, an honest trundler who compensated for his lack of pace by overstepping the crease so often that, when he removed Smith late in the afternoon, the dejected Australian waited on the boundary looking absolutely certain he was about to get a reprieve.

It was not to be. Smith – like Burns, whose early dismissal spared headline writers the duty of tasteless puns, and Warner, who somehow got himself out to a leg-side long-hop – missed out on a feast.

Nobody will claim that this was a particularly hard day’s Test cricket. There is facing Stuart Broad and Jofra Archer in the gloom at Lord’s, and there is facing de Grandhomme and Matt Henry on a fine day in Sydney. Labuschagne had proven himself in the former, so he deserved the payoff of the latter.

He is making batting look as easy as breathing, which, thanks to a favourable wind direction, was unhindered. Whether attacking or defending, deflecting to leg or off, Labuschagne’s eye was pure and his bat was all middle.

There was a moment that said it all. Labuschagne advanced to Will Somerville and hit across the line, in the air, to mid-wicket. In excitement, several New Zealand fieldsmen rose to their toes and threw up their hands. The ball was caught . . . in the seats in front of
the Members’ Stand.

New Zealand never lost interest, only the contest. Labuschagne, inside his personal cricket bubble, commanded both.

He continues to give the impression it will take an act of God, and perhaps not even that, to disrupt his accumulation of Test match runs, which yesterday passed 1300 and shows no sign of pausing for breath.

Malcolm Knox is a sports columnist for The Sydney Morning Herald.

Previous Long and short of proposal for truncated Tests: No
Next ‘The guy’s a training freak’: SBW up and running with Wolfpack