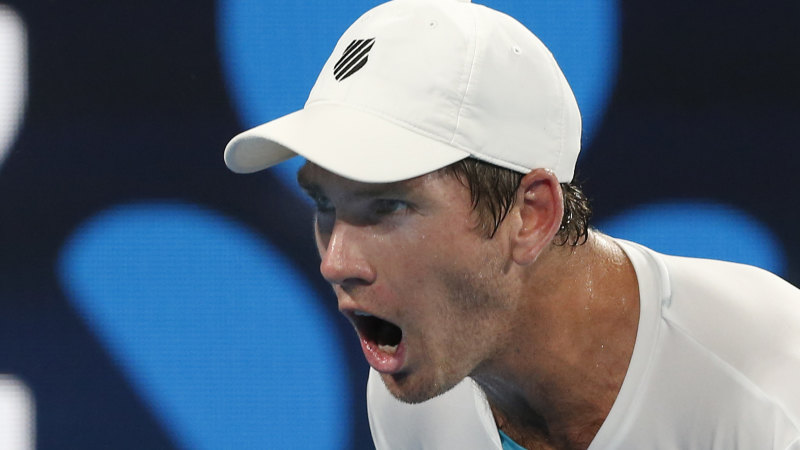 After not giving Kuzmanov one break point opportunity throughout the first set, Norrie capitulated when on his own serve in the second.

He produced a pair of double faults which all but handed Kuzmanov a 2-0 break.  Kuzmanov held his nerve and forced a decider with a 6-3 second set, opening the door for the first major upset of the tournament.

The match had been turned on its head and the equation for the third set was simple. If Norrie could rediscover his dominant form from the first set, Jamie Murray and Joe Salisbury were rated $1.04 favourites in the doubles leg of the tie. Dan Evans would have a free swing against Grigor Dimitrov.

If Kuzmanov could continue his run however, Dimitrov would have a golden opportunity to snatch Bulgaria’s first points of the tournament.

The pressure was on. Kuzmanov’s first service game showed it was getting to him. He produced one too many unforced errors to put Norrie up a break 2-0.

The Bulgarian fought back. He took Norrie on at the net and looked set to erase the deficit when he broke back. But Norrie broke the Bulgarian again before cruising through the final stages of his 6-2, 3-6, 6-2 win.

In the first set, the world No.53 broke Kuzmanov’s serve twice on his way to a comfortable 6-2 inside 45 minutes.

Norrie landed a mammoth 95 per cent of his first serves in the first set. He claimed 16 of those 19 points and did not even give his Bulgarian foe as much as a solitary break point opportunity.

That trend stopped dead in its tracks when play resumed. But after enduring the scare, Norrie held on and all but assured Great Britain victory on the opening day despite the presence of Dimitrov in the second singles match.

Bulgaria now must beat Moldova to stay alive on Sunday, while Great Britain will have the chance to stay atop of Group C when they face Belgium, who beat Moldova earlier on Friday.