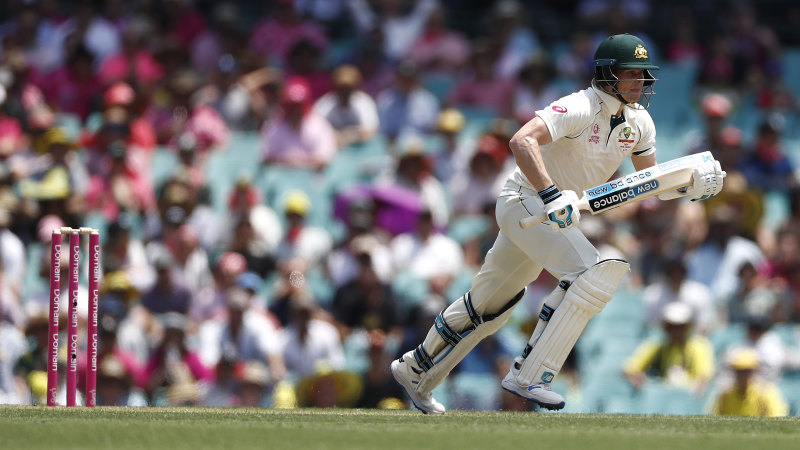 “I actually had no idea he was on zero until the 38th ball. I actually thought we were rotating the strike quite well,” Labuschagne said.

“We came to the middle and I was like ‘what’s the carry on for?’ There was a lot of noise, a lot of oohing and aahing. He was like ‘I’m on zero’. I was like ‘really?’ I had no idea. And I think the next ball he got one on his hip and I was actually probably sitting on my bat a bit because we hadn’t run that one for the whole innings.”

Smith and Labuschagne, master and apprentice, went to join in a 151-run partnership before Smith’s exit for 63 in the final 30 minutes.

For a change it wasn’t as a result of the short stuff of Wagner but the new ball sent down from a dozen or so paces from Colin de Grandhomme, who had him caught by Ross Taylor in the slips.

It continued a peculiar home summer for Smith without a Test century, at least given his past deeds and his magnificent Ashes tour, although he’s hardly in a slump.

Friday’s watchful innings was just about exactly his average and followed his first-innings 85 in Melbourne, helping put Australia right on top alongside Labuschagne, who can’t stop scoring tons, with four now this summer.

Wagner, though, has at least succeeded in slowing Smith down with his leg theory tactics, even if it’s done little to halt Australia’s dominance.

The Kiwi quick began the Sydney Test with figures of 4-22 from 116 balls in his personal showdown with Smith and after removing David Warner just after lunch – caught by de Grandhomme at leg slip – he again set his attention squarely on Australia’s former captain.

Pitching the ball outside leg stump and with fieldsmen stationed at short leg, leg gully and backward square as well as short mid-on and mid-wicket, Wagner had a cautious Smith successfully locked down from the Paddington End. While he was in the attack de Grandhomme and leg-spinner Todd Astle were able to help prevent him scoring as they held up the Randwick End.

However, after he eventually turned Wagner behind short leg and set off, New Zealand’s stand-in captain Tom Latham gave the left-armer a break, and with the Black Caps missing nearly 600 Test wickets in experience without the injured Trent Boult and the omitted Tim Southee, the pressure was promptly released.

While Smith comparatively breezed to his half-century with 104 balls required for the remaining 49 runs Wagner was still able to limit his scoring against him in two subsequent spells. In all, Smith faced 42 deliveries from Wagner and managed five runs.

“They’ve come prepared. They’ve come at the best batter in the world in a different way,” Labuschagne said. “He’s still countering it, he’s still putting runs on the board, so it’s just testament to him as a player but they have come prepared well.”

Other international teams will have watched and taken note of the Kiwi’s carefully devised blueprint to thwarting the Australian great but as was shown again on Friday it is far from guaranteed to succeed.