Dramatic airlift from the eye of the storm

admin January 4, 2020 National News Comments Off on Dramatic airlift from the eye of the storm 167 Views 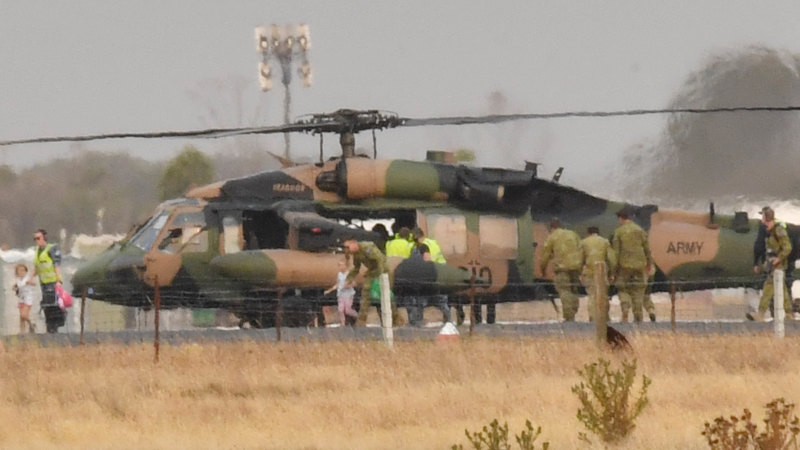 In a dramatic escalation of the bushfire response, the Australian Defence Force on Saturday deployed Black Hawk and Chinook helicopters to evacuate anyone who wanted to leave Omeo to the regional centre of Bairnsdale.

O’Connell and her two young daughters, Holly and Chloe, were among those who flew to safety above the fires ravaging a huge swathe of countryside. Her husband Aaron stayed back to help protect the town.

Speaking after her chopper landed safely in Bairnsdale, she said the evacuation was voluntary and calm.

“They just had an opportunity with the smoke and they took it,” she said. “There wasn’t any chaos at the assembly point. People that wanted to go were going and people who were comfortable staying were happy with that choice.”

Despite the unprecedented deployment of the troop-carrying aircraft, Omeo residents and firefighters remain confident the town can be defended. The town has been preparing for a major fire since November, when the first blaze was sparked.

Omeo was on Saturday facing attack from a fire to its north, the approach of the massive Gippsland fires from its south, and the risk that a forecast thunderstorm would bring lightning strikes and potentially, new fires throughout the night.

The gold rush town sits on the edge of the Snowy Mountains on the Great Alpine Road which connects the Gippsland beaches to the Murray River and the peaks of the Victorian High Country.

It’s best known pub, the Golden Age Hotel, was rebuilt in the 1940s after the original one was razed by the Black Friday fires of 1939. Where most of Victoria thinks of Black Saturday as the worst fires on record, Omeo remembers the siege of 2003, when megafires roared across the High Country for weeks, destroying 41 homes and killing 9000 livestock.

Tracey Sim runs the Omeo Colonial motel. She moved to Omeo in 2018 to live near her sister and had never been in a bushfire before. Her only guests are firefighters. She said that so long as they are nearby, she felt anxious but safe.

As she spoke to The Age, she could hear bulldozers clearing firebreaks and fire trucks racing past. She saw burnt leaves falling from the sky. “It is very smoky and very dark towards Dinner Plain but we are all good,’’ she said. “I’m taking note of the locals. They know.”

Her sister lives with her partner on a farm about 8 kilometres outside of Benambra, to the north of Omeo. “We are frightened for them’’ she said. “They are just waiting on the wind.”

Across the highway from Sim’s motel is the open reserve where Omeo residents and those retreating from neighbouring towns have sought shelter. The grass is sodden and impossibly green and like the town, ringed by CFA trucks.

Tracy Joyce has been sheltering there since Thursday, when she rode her horse 18 kilometres into Omeo from the ghost town of Cassilis. Joyce said her property in Cassilis was well prepared to withstand a bushfire but she had nowhere to safely keep her horse.

She said there are about 30 stabled in the Omeo stockyards and, before the airlift, more than 100 people gathered on the town’s recreational reserve. “There is probably no better place to be when you are in the middle of what could be shitstorm central,” she said.

In the town of Benambra, 83-year-old Ben Buckley scanned the horizon with well practised eyes. To the southeast, he could see smoke rising above the Gippsland fires. To the southwest, he could see the fire that had torn out of the Alpine National Park and is now threatening Omeo. For the first time in days, the sky above his home was clear.

“The megafire in the southwest has sucked all the smoke haze away,’’ he said. “It might miss Omeo but it might not. The smoke looks pretty thick over there.”

Buckley’s daughter Sonia has a sprinkler system on the roof of her house and a deep, reliable bore to draw water from.

“We’ve got two pretty big megafires coming from both sides now,’’ she said. “We’re in the eye of the storm. It’s quiet here but the community spirit is pretty good. The ones that needed to get out have already gone and the ones who couldn’t have stayed. That’s just how it is.”