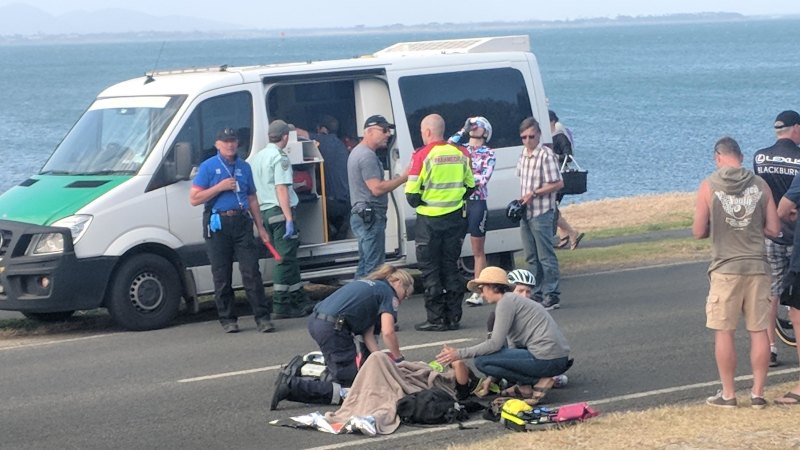 It took the shine off a brilliant performance from Hosking, one of seven riders, including Spratt, Roseman-Gannon, Matilda Raynolds, Jessica Allen, Peta Mullens and Alana Forster, who escaped midway through the race after stage one winner Spratt attacked.

Hosking bided her time while Spratt set the pace for her teammate and hit the lead soon after the final turn. Roseman-Gannon was a brave second while Raynolds surprised to finish third. Allen has already won the sprint title provided she finishes the final leg on Sunday.

Hosking, who will wear the yellow jersey in Williamstown, praised the performances of Roseman-Gannon and Raynolds, saying her teammate helped her to victory but the other two stole the show.

Race director John Trevorrow admitted it was distressing for everyone to see Malseed in such pain however he knew she would accept that such unfortunate incidents were part of racing.

White just pipped Brenton Jones on the line to take a one-point lead into the final leg at Williamstown, with Jensen Plowright third and Friday’s winner Sam Welsford fourth.

White said it was going to be tough to hold onto the lead on the final day particularly with Australia’s team pursuit squad, which Welsford headlines, chasing him. However, he had confidence in his BridgeLane teammates including Plowright.

Meanwhile, Graeme Frislie won the second stage of the men’s support race in the hunt for the Damion Drapac Trophy, taking the yellow jersey to Williamstown ahead of Shannon Johnston who won the first stage on Saturday.

Michaela Meharry won the second stage of the women’s support race earlier after finishing third behind Raelene Lesniowska on Friday.