admin January 4, 2020 Latest News Comments Off on Phoenix off to flyer in bid for perfect January with win over Mariners 89 Views 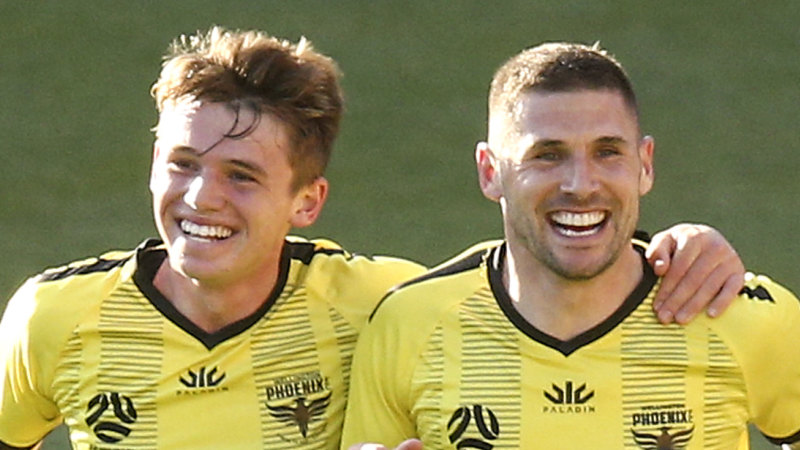 The three points cemented Wellington’s place in the top six.

The Kiwi side will finish the round in fourth or fifth place and hoping to capitalise on a friendly schedule in January. Coach Ufuk Talay has challenged his players to win four from four games this month – all against teams in the bottom half.

Their prospects are helped by the improving fitness of former Celtic striker Hooper, who made his seventh appearance but just his second start this season.

The 31-year-old’s only previous start was two months ago against Melbourne City – when he scored his other goal for the club but suffered a quad strain, restricting him to bench appearances since.

Hooper looked short of game time and was eclipsed for impact by Ball, who was a constant menace.

The former Fleetwood Town striker’s departure soon after the break, due to an apparent hip flexor injury, affected the Phoenix, Talay said.

“I wasn’t pleased about the second half. Bally coming off injured changed things for us. That wasn’t in the game plan,” he said. “We adapted to it. We weren’t great in the second half but we were good enough to keep them out.”

Mariners coach Alen Stajcic omitted Milan Djuric completely for the first time this season, saying the Serbian attacking midfielder had a “few issues” and was in need of a rest four days after their 3-0 loss to Perth.

Stajcic didn’t use the short turnaround as an excuse.

“To me, Wellington are one of the top two or three teams in the competition at the moment … but to all intents and purposes we competed today and in a lot of aspects outplayed them,” he said. “There’s a lot of pleasing aspects but we know that points are critical if we want to be contenders for the finals series.”

Hooper’s tap-in goal, his second for the Phoenix, came via some strong build-up work from Ball and a Tim Payne assist in the 13th minute.

Ball’s goal was more spectacular, cutting inside two defenders before curling a low shot inside the far post from a difficult angle.

Ball went close twice before a big finish to the first half from the Mariners, who benefited from an unfortunate DeVere flick header off Jack Clisby’s cross.

Chances dried up for both teams in the second half, although Jordan Murray and Daniel De Silva came close to equalising late for Central Coast.