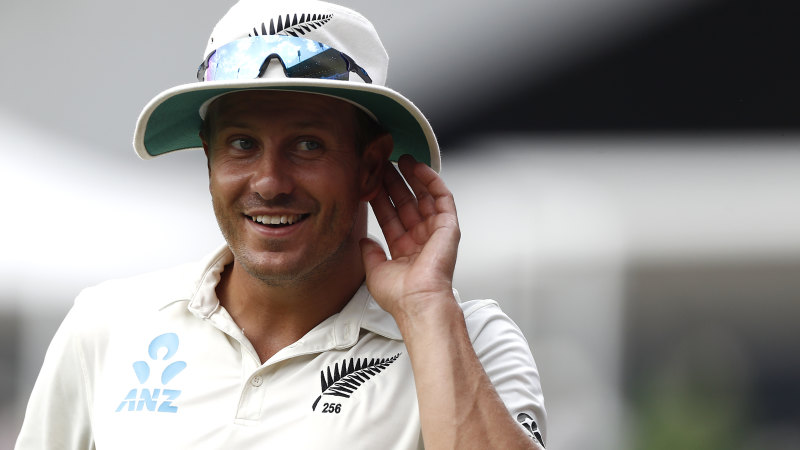 Matt Henry has broken his thumb while batsman Jeet Raval was forced off the field due to the virus that is sweeping its way through their camp.

At one point, their situation had become so dire batting coach Peter Fulton had the whites on ready to field in case another man went down.

“For us it was an opportunity to say “there’s nothing to lose”. There’s guys who have been ill, there’s injuries and niggles but it’s a chance to galvanise us and come together and fight for each other,” spinner Todd Astle said.

“It’s just hanging in there and knowing our fight and commitment to each other is second to none. We needed to make sure we could believe that. We actually had a really good day today. We haven’t had a whole heap of that.”

The Kiwis have taken extra precautions around hygiene to minimise the risk of the virus spreading.

“It just wipes you out, you don’t have appetite and guys are tired,” Astle said.

“We don’t want anyone else going down, of course. It has thrown us and our plans out a bit but at the same time it’s something we have to deal with and do the best we can.”

The Black Caps arrived in Australia a month ago with high hopes of breaking a 34-year drought. Instead, one of the best credentialled New Zealand teams to land on these shores is in real danger of becoming the first Kiwi side to suffer a 3-0 whitewash in Australia.

There are still some grim numbers on the scoreboard for the Kiwis but it had the potential to be far worse. Though Marnus Labuschagne continued his rich vein of form, Australia lost their final seven wickets for 166 with no other play reaching 50.

The Kiwis then dug in with the bat as openers Tom Blundell and Tom Latham produced their longest partnership in terms of overs, and their third most productive in terms of runs.

Their union of 63 is eighth on New Zealand’s all-time list of opening stands in Australia. The top three have all come at the SCG, where the lower bounce is more in keeping with the conditions they are familiar with back home.

In ordinary circumstances, New Zealand’s position should promote optimism among their fans but without their batting ace Kane Williamson and middle-order rock Henry Nicholls the hosts’ first innings total of 454 must seem a very small speck on the horizon.

Nevertheless, they will head into the third day knowing they can give themselves a big chance of saving the game if their undermanned line-up can defy the odds by putting in a strong showing with the bat.

The Black Caps are set to be down a batsman for the second game in a row after Henry’s injury. The speedster delivered a further 11 overs on the second day, claiming the wicket of Travis Head.

He has had his left thumb strapped and placed in a splint with the team saying his batting this game will be “match dependent”. In other words, he will only bat if needed to save, or win, the game, though the latter scenario is unlikely.