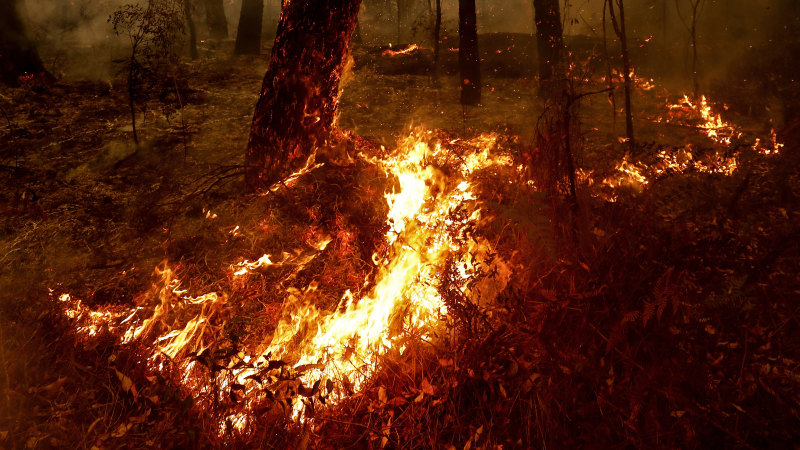 “I have a very long list of roads and bridges, community infrastructure, public housing, the list goes on and on,” Mr Andrews said.

“We will need the Commonwealth government’s support and I’m very, very pleased that the Prime Minister has been so clear, so early that Victoria will get everything it needs and more.”

He said his government would also consider a stimulus package for East Gippsland, which has had its peak tourism season ruined by the fires, in consultation with the federal government to help small businesses, support local councils and get the tourism industry “going again”.

Mr Andrews left the door open to a future potential increase in the fire services levy, which brings in about $650 million annually, as the state grapples with the cost of tackling the huge blaze.

The Environment Protection Agency is warning that smoke haze could once again blanket Melbourne on Monday as smoke from fires burning in Tasmania makes its way north.

“We know that the weather will start to warm up and that when we get into Thursday and Friday, potential spike days again,” he said. “So we want you to continue to stay across the conditions, do what the warnings, watch and acts are telling you to do.”

Authorities fear that hundreds of people remain between two massive fires converging on either side of the Victorian and NSW border.

Conditions on Sunday were still too dangerous for assessment teams and residents to determine the extent of damage in many north-east communities from Saturday, despite earlier hopes.

Fewer than 10 kilometres separate the Corryong and Tumbarumba fires in some areas and authorities are preparing for them forming a single blaze burning hundreds of thousands of hectares.

In a stark warning to remaining residents on Sunday afternoon, Tallangatta incident controller Leith McKenzie said: “There is no guarantee that anyone will go there to support them”.

He said about 50 per cent of the population in the danger zone had left, but many, perhaps into the hundreds, remained to defend their properties.

“They should be enacting their evacuation plans. They should have already done it,” Mr McKenzie said.

Clearer skies in East Gippsland allowed the defence forces to fly more people out of Mallacoota while hundreds fleeing fires in the north-east camped at Wangaratta with pets and livestock over the weekend.

HMAS Choules and MV Sycamore were returning to Mallacoota, from where they had previously ferried more than 1100 people.

Australia’s defence chief General Angus Campbell said it would be a long haul as the defence force began rolling out an unprecedented response to the bushfire crisis on Sunday.

“We’re in for the long haul and also very aware of the immediate need to assist fellow Australians today,” Mr Campbell told media in Canberra on Sunday.

“The work of the ADF is and will continue to be in complement and close co-ordination with state authorities.”

Acting as a supply vessel and also offering a floating hospital, the Adelaide on Sunday reached waters off Eden where it is expected to be based for several days.

Previous John Howard praises Scott Morrison but urges him to work with states
Next Crowd controller choke holds man, bashes his head into a fence at Fremantle festival