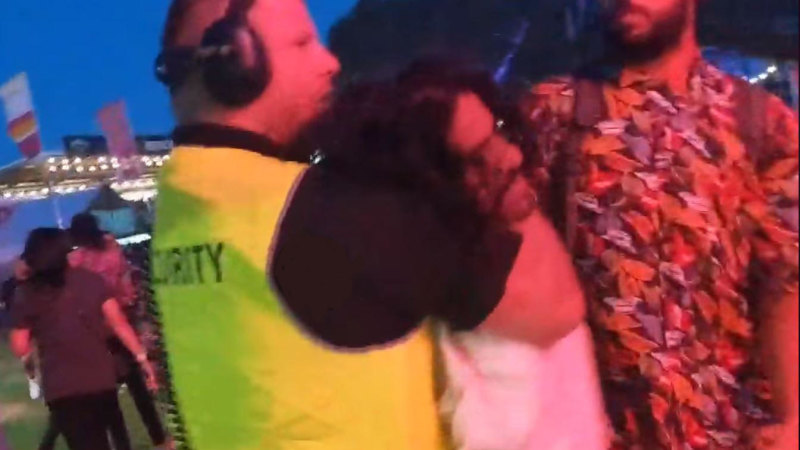 An on-looker can be heard saying “is that a choke hold, mate, aren’t they illegal”.

Yeroc Thoob told WAtoday the security guard’s restraint seemed “extreme” and decided to film it because he had experienced “heavy handed” crowd control at recent festivals.

“I’ve noticed at the last few festivals in Perth I’ve attended (Groovin’ the Moo, Laneway, Falls – this time last year) that the security are often heavy handed in their ‘evictions’,” he said.

“I took out my phone because I thought it looked a little extreme as the person didn’t seem to be struggling.

“By the time I started recording there were three guards on him. I don’t know any of the parties involved, I just thought trouble was bound.”

In a statement, Ace Security told WAtoday the subcontracted crowd controller’s actions were unacceptable and not in line with the company’s code of conduct.

“During the intoxicated patron’s removal, the subcontracted crowd controller displayed actions which DO NOT match our code of conduct,” it read.

“The subcontracted crowd controller’s actions do not reflect our training protocols, nor the expectations we have for our staff/subcontracted staff and/or their treatment of patrons.

“Once senior management was made aware of his actions, the subcontracted crowd controller was asked to immediately leave the site, and has subsequent shift/s were cancelled.”

The statement said the male patron had showed signs of “intoxication” and that’s what the crowd controller had responded to, and although he responded appropriately at first, it was his actions that followed that weren’t acceptable.

“The crowd controller, acting as per requirements of the venue’s liquor license, approached
the apparent intoxicated patron and requested he exit the venue,” it read.

“The patron refused to follow direction, requiring the crowd controller to place him in an arm restraint to facilitate his removal.”

Falls Festival general manager Georgia Beehag said they were “extremely disappointed at the behaviour of the security guard involved.

“The safety of our patrons is paramount and we do not condone violence in any capacity at our event,” she said.

Managing director of Festivals at Secret Sounds Group said the crowd’s behaviour over the last couple of days had been “absolutely amazing” so it was a shame it had been marred by this incident.

Lauren is a casual reporter and producer for WAtoday.

Kate is the deputy editor of WAtoday.