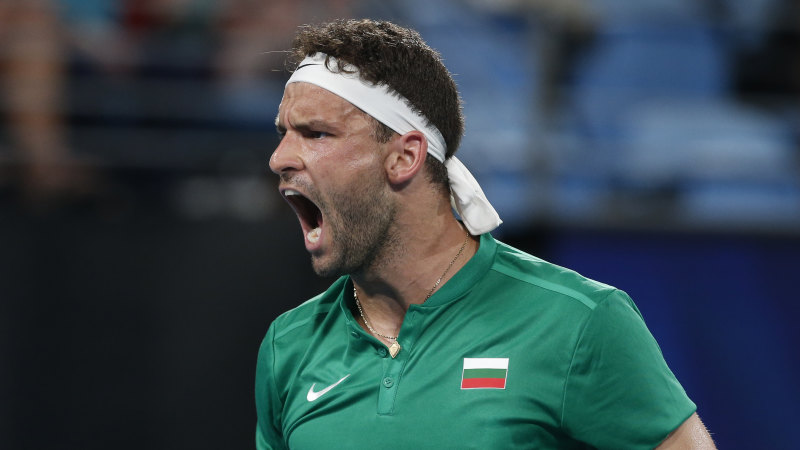 The air quality was its worst during the doubles match, with Regents Park, the nearest monitoring site to Sydney Olympic Park, at 3pm recording a 150 AQI (air quality index),

a level  considered to be “unhealthy for sensitive groups”, with the advice being that outdoor exercise is”not suitable”.

The first match of the pitted Moldova’s world no. 818 Alexandra Cozbinov against Bulgaria’s world no. 423 Dimitar Kuzmanov. Despite some spirited resistance from Cozbinov, Kuzmanov emerged victorious in straight sets, 6-1, 7-5.

Post-match, Kuzmanov said he was “the happiest person” and said being involved in the ATP Cup was a huge deal for the Bulgarian players and their fans back home.

“We were joking that we haven’t seen these emotions back home since the 1994 World Cup when no one was sleeping and the whole country was just watching, it’s just great energy that we feel,” Kumanoz said. “[The ATP Cup] is so special, because it gives chances to smaller nations and not so well recognized players probably as I am, as Cozbinov is.”

Despite losing both singles matches, Cozbinov and Albot were able to to claim the doubles win against Dimitrov and Alexandar Lazarov, the first win for the Moldovans across their two ties.

Dimitrov has taken Bulgaria to an early lead in the Cup, with the nation now two from two in the round-robin tournament and well-placed to qualify for the final eight.

Taking on a coaching role for the younger players, Dimitrov said he was “finally starting to understand” what it means to be a leader.

‘‘I think, you know, my dad was the one who told me how to play tennis, and when I was chosen to be a captain, he was, like, ’Oh, now you’re going to see what is it to be on the other end’,’’ Dimitrov said.

“I never thought I could do a double role, but I took this on board. I wanted to give something back to the boys and make sure they learn.

“I think coming into this thing, I knew that if we come together, we’d have a great opportunity. I know I have to not only believe in myself now but I need to believe in the players that are with me.”

Dimitrov has won his two singles matches to date and has his side on the cusp of making the quarter-finals.He admitted not playing the typical role of the selfish singles star had done him some good.

‘‘This time I couldn’t just think of myself and how to get ready for my match for whatever, 11:30, 12:00. So I just had to build up the team a little bit for today, and after that it was just all about the game,’’ he said.

Bulgaria will face Belgium on Tuesday night, with a win securing the top place in Pool C and a spot in the finals.

Previous Australia continues domination of NZ at SCG as Lyon passes Botham
Next After close shave on day three, Burns lives to fight another day