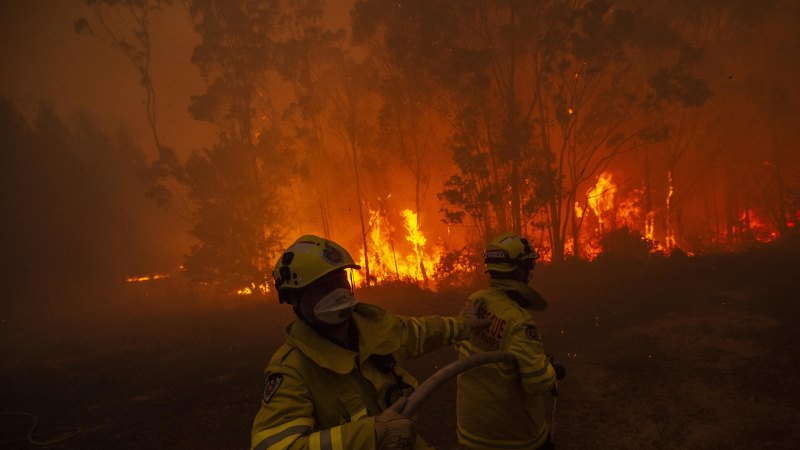 The US’ national firefighting co-ordination centre has sent an additional 20 veteran firefighters from California. There were 81 US firefighters aiding Australian authorities at the end of last week, a situation report from the centre said.

Australians have previously travelled to the US and Canada to fight fires in the northern hemisphere, but this fire season is the first that US firefighters have come down under.

Canada is also ramping up its response to Australia’s catastrophic fire season, which has claimed 24 lives and destroyed hundreds of homes.

Melanie Morin, an information officer with the Canadian Interagency Forest Fire Centre, said there were 87 Canadians helping with the fires on Monday.

“They are all specialists in the incident command system, which is an international system that many countries use … it is largely standardised so we can easily trade resources between Canada and Australia,” Ms Morin said.

While there were no New Zealand firefighters in Australia at the moment, Mr Considine said there had been hundreds and he expected they would return soon. “They have been been very supportive,” he said.

Two more crews of Canadians are expected to arrive in the coming days, taking the total number here to 95 before crews that arrived last month return home.

Ms Morin said Canadians had been so eager to help with the fires in Australia that the inter-agency centre had placed a note on its website telling would-be volunteers they could not travel to Australia and fight fires themselves.

“We had to make people understand that you guys in Australia have a certain system for volunteers … and we gave people a few other options to help,” Ms Morin said.

“Australia is the closest friend of PNG and is always the first in PNG in our times of adversities and we offer our hearts and our hands to you in this time of fire-induced tragedies,” Mr Marape said on Facebook.

He said he had spoken to Mr Morrison and offered a combined group of 1000 soldiers and firefighters to Australia. Mr Morrison said the Australian Defence Force was assessing offers from PNG, Singapore and New Zealand.

Canadian Foreign Minister François-Philippe Champagne said in a statement Canada was prepared to consider further assistance. “When wildfires spread through Canadian communities, Australia answered our call for help. We are proud to do the same,” Mr Champagne said.