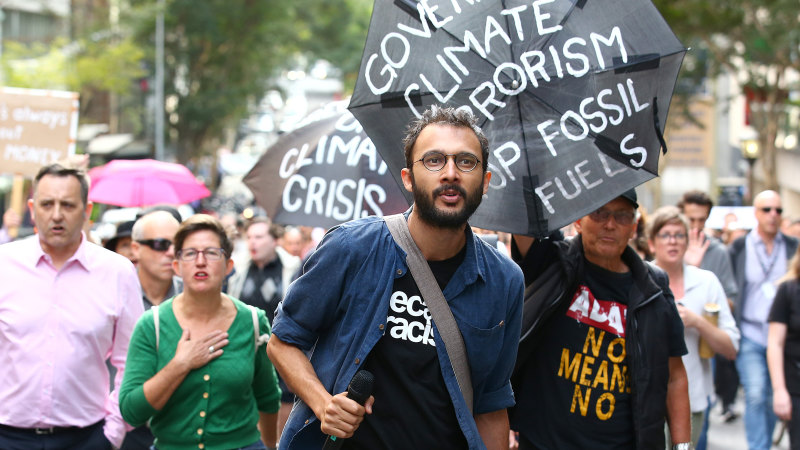 “The CEO has decided to refer it on the basis that it might be misconduct or inappropriate conduct,” Cr Sri said. “What the CEO should have done is dismissed the complaint.”

“I might disagree with the Liberals about a lot of things, but … I wouldn’t presume to tell them who they should and shouldn’t allow into their office.”

Cr Sri said the group had been booking the community meeting room of his ward office “like a wide range of resident groups”.

“As far as I know, they’re not engaging in any illegal activity,” he said. “Essentially, what the council is trying to do here is to prevent people even from gathering together to discuss their ideas and concerns.”

“This is a really concerning throwback to the authoritarianism of the Joh Bjelke-Petersen era. We’re seeing both the local council and the Queensland Labor government are trying to crack down on peaceful protesters.”

Brisbane City Council has been contacted for comment. Brisbane Times has confirmed the nature of the complaint and its referral.

The complaint is not the first against the outspoken councillor. In 2018, Cr Sri was referred to the panel after a “die-in” protest near the Queensland Children’s Hospital and a complaint from a contractor on a council-led road project.

He was fined by the panel in October after posing as a concerned resident in a voicemail to a state MP in protest over a controversial development in Deebing Heights.

In October, the motion to ban Extinction Rebellion from using council facilities put forward by lord mayor Adrian Schrinner argued they were “not suitable meeting places for organisations that advocate or incite illegal activities”.

Cr Schrinner said the climate activist group, who had blockaded traffic repeatedly in the week prior as part of an international rolling protest, was “actively disrupting” the city and should no longer be able to book council facilities.

The ban raised the attention of civil liberties groups, Queensland’s Human Rights Commission and the Australian Library and Information Association.

The state government has also made moves to crack down on protesters, passing controversial laws banning the use of lock-on devices claimed to contain traps – a claim legal groups said had not been substantiated.

Previous A timeline of the ring of fire around NSW, Victoria and the ACT
Next Police search for missing Perth mum and baby