Breaking News
Home / Victoria News / ‘Not over by a long shot’: Premier warns of more evacuations to come

‘Not over by a long shot’: Premier warns of more evacuations to come

admin January 7, 2020 Victoria News Comments Off on ‘Not over by a long shot’: Premier warns of more evacuations to come 142 Views 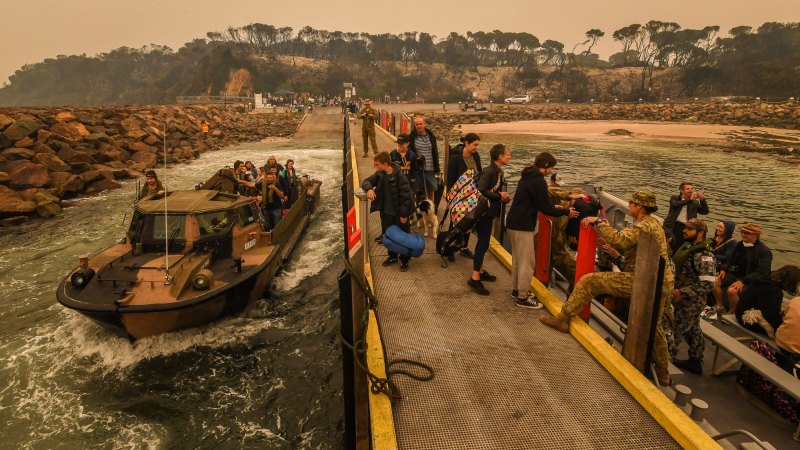 “There will be messages that are all about your safety and your wellbeing. They are of the utmost importance, they are about life and death and they will be sent out, almost certainly, Thursday and Friday this week.”

Temperatures in East Gippsland are set to hit the high 30s on Friday, with a forecast change in the afternoon.

Authorities will use Wednesday’s continuing milder conditions to aid their efforts to strengthen containment lines, open up roads to isolated communities and count the cost of the ferocious fires.

But East Gippsland firefighters were still grappling with 1500 kilometres of fire front on Tuesday, and the massive Corryong fire in the state’s north-east is expected to merge with another major blaze across the NSW border after the weather turns hot again on Thursday.

Emergency Management Victoria warned on Tuesday that the alpine fires, particularly those burning around Omeo, might be fanned by the expected northerlies later this week and join up with the East Gippsland blazes.

Victorians were also urged to donate only to reputable charities or bushfire relief funds amid reports of bogus cold-call appeals.

About 204 homes have been confirmed destroyed in the Victorian fires disaster and two people have lost their lives.

Melbourne’s air quality rating was raised to “moderate” on Tuesday after the city choked in a thick blanket of bushfire smoke on Monday, leading the Environment Protection Authority to issue a health warning for residents. The smoke is not expected to clear completely from the city until Friday.

The sea and air evacuation by the Australian Defence Force of the East Gippsland holiday town of Mallacoota, which remains cut off by road, is now complete with the last 300 stranded holidaymakers evacuated on Tuesday afternoon.

About 200 embarked the HMAS Choules for the 17-hour voyage to the HMAS Cerberus naval base on the Mornington Peninsula, with another 100 people flown out by helicopter and fixed-wing aircraft.

Ms Neville responded to reports of fraudulent appeals for money to help bushfire victims by advising would-be donors to use only genuine charities. She condemned those behind the fraud attempts.

“All I can say is this is the lowest of the low, so can I recommend to Victorians, so many generous Victorian who want to give, to look up the Bushfire Appeal, that’s the safest way,” she said.

“This is money that will go back to families.”

Ms Neville said police had maintained a presence in some evacuated communities after “shameful” reports emerged of looting from homes in the aftermath of the first wave of fires on New Year’s Day.

She also warned businesses that the Australian Competition and Consumer Commission would be looking into reports of price gouging by unscrupulous operators trying to cash in on the crisis.

Mr Crisp said there were 14 individual blazes within the four main fire complexes in East Gippsland and the north-east, with 13 of them at “watch and act” alert level and that the rain in recent days had made no difference to the condition of the “tinder-dry” fuel load.

“We know in some areas there’s been 5 millimetres of rain, in Bairnsdale it’s probably 18 to 20 millimetres. That is not going to make a difference,” the commissioner said.

“It’s warming up again on Thursday, and on Friday again we have a spike day.”

Mr Crisp said there was still time for residents to get ready for the heightened danger days by preparing their homes and getting ready to leave when the warnings come.