The fight to save Batlow’s 99-year-old pub

admin January 7, 2020 Federal Politics Comments Off on The fight to save Batlow’s 99-year-old pub 59 Views 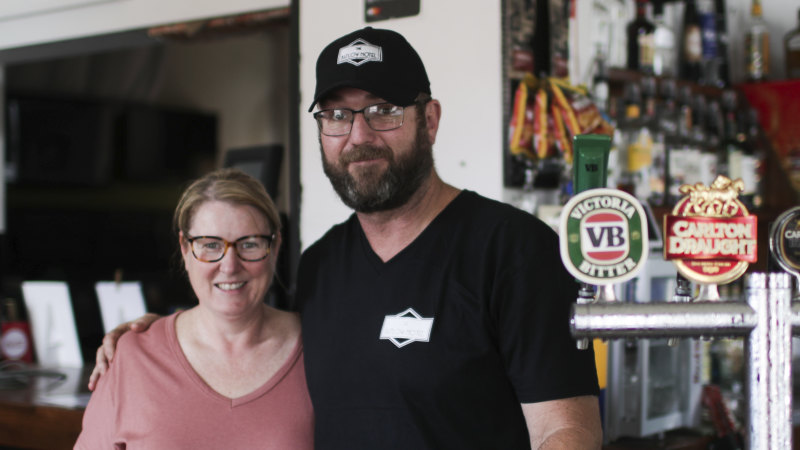 “I was listening to the RFS calls on UHF and three or four trucks left to keep ahead of the fire, and I thought: ‘Wow, we’ve dodged a bullet, we’re going to be OK’.”

But all of a sudden, they saw the fire on top of a nearby hill and coming through “pretty quick”.

“All the trucks left to go up there. Then the wind changed and picked up and it started coming back towards the town,” he said.

“As it came through at the back of the old cannery, it went ‘whoosh’ so quick. You could hear the crackle of the fire coming through and you knew it was coming fast. It only crowned a couple of times through the trees but you could still hear it coming quickly.

“Before you knew it, all down here was on fire beside the service station. I got on the radio and they said ‘we don’t have anybody’ – they didn’t get the resources they asked for.

“So I put out a few spot fires as they were coming up towards the pub. I’ve got a couple of fire reels at the pub so I was using one of those. The visibility was half-decent, it wasn’t too bad – it wasn’t until the fire went out that the smoke came in and made it really hard to see.”

Rudd said people were everywhere trying to do what they could.

“Some stayed in their houses. Most were out and about trying to do what they could,” he said. “I got a spot fire in the pine tree at the back. It wouldn’t go out. I’d only just this year built a stage under it and it backs on to the shed, and I thought I was going to lose them for sure. But I was able to get it out.

“I was always quietly confident that it was going to be OK. I just kept wetting down any areas that might catch fire. There are gable ends and timber. There were spot fires in the back of all the yards here and a few times I had to use buckets because there was no water to put things out.