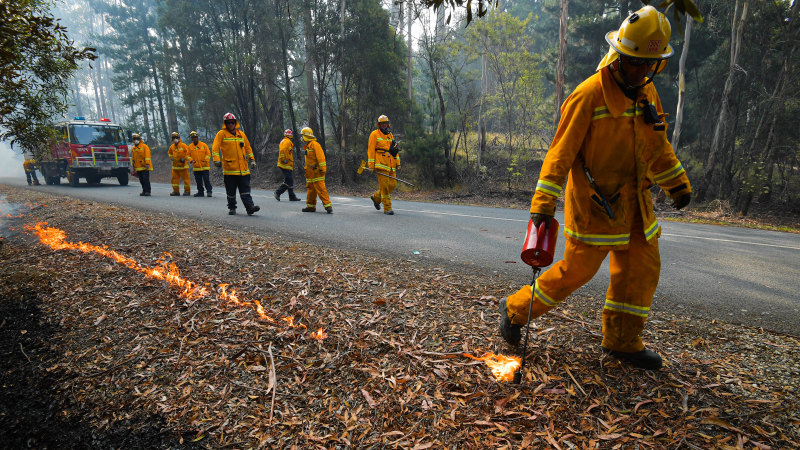 Ms Neville said the recent rain and increased humidity would make no difference to the danger posed by new or existing fires and that Victorians should not be complacent about their safety.

“These fires remain dangerous, they remain dynamic, they remain volatile and the conditions that we’re going to see can give significant life to these fires going ahead on Friday,” the minister said.

Anyone in fire-affected areas should leave, she stressed.

“The safest place to be is outside those fire-affected areas and in built-up areas,” she said.

The Bureau of Meteorology has issued an extreme fire danger forecast for the north of the state on Friday, with a severe warning for the Mallee and north-east districts.

“We will potentially see some gusts as high as 70-80km/h move through with the west to southwesterly change.”

Ms Neville also announced the death toll from Victoria’s fire disasters now stands at three after the death of Forest Fire Management Victoria firefighter Mat Kavanagh, who died in a car crash on the Goulburn Valley Highway on Friday.

The government believes about 300 homes have been destroyed with a number of other structures, including outbuildings and sheds also lost.

The Australian Defence Force has completed the evacuation of the stranded East Gippsland coastal town of Mallacoota and has now deployed more than 1200 reservists nationally to help in the crisis with a “significant number” preparing to join the effort.

The Army is also setting up camp for 100 international firefighters at Omeo, and providing psychologists and chaplains to assist with mental health support.

The return of hot north-westerly winds and temperatures above 40 degrees on Friday are expected to force fresh evacuations in the north of the state and cause two massive fires burning on either side of NSW/Victoria border to join up.

Hundreds of people, mostly in scattered rural properties, may still be between the Corryong fire, also known as the Upper-Murray Walwa fire, and the Tumbarumba fire in NSW.

Several hundred people in the timber-milling community of Tumbarumba are also staying to defend their properties.

A smaller, third fire burning between the two is posing another danger to properties.

“When large fires like that join together you get a fairly dramatic increase in fire behaviour, given you’ve got two fires moving towards each other, There’s more pre-heating, more fuel burning – and at a faster rate,” Upper Murray incident controller Jon Rofe said on Wednesday morning.

Other communities on the western side of the Victorian fire may also come under serious threat for the first time.

“The forecast for this part of the world on Friday is to see temperatures in the low 40s, very low [relative humidity], so dry air, and north-westerly winds of 20-30 kilometres, possibly higher around the change,” Mr Rofe said.

“Then a south-westerly change after that hot day. So if we do get running fire while the wind’s from the north and then it changes direction that would be quite a critical time of day for fire activity.”