Breaking News
Home / Victoria News / ‘If you can get out, get out’: Alert issued ahead of spiking fire risk

‘If you can get out, get out’: Alert issued ahead of spiking fire risk

admin January 9, 2020 Victoria News Comments Off on ‘If you can get out, get out’: Alert issued ahead of spiking fire risk 74 Views 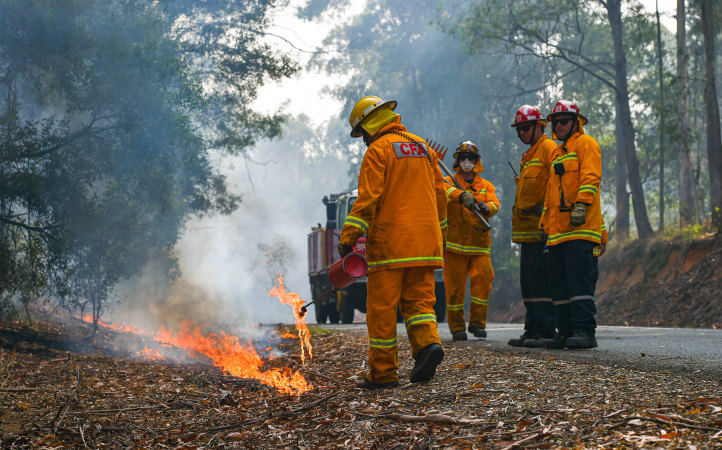 “That message, as we indicated, is quite blunt. It is saying if you can get out, you should get out.”

Mr Andrews warned authorities would continue to send messages to those in fire zones because “we will not be able to guarantee their safety”.

Mr Crisp confirmed on Thursday that the number of homes around the state destroyed or damaged in the crisis now stood at 244 with another 400 “significant” structures affected by the fires.

“We know those numbers will grow,” Mr Crisp said.

Three lives have been lost Victoria.

“You should not be there,” Mr Crisp said.

“It is a very dangerous and dynamic situation that will confront us in the next 12, 24, 36 hours.”

Mr Crisp said as well as Victorian and NSW fires possibly merging on Friday, there was “every chance” of several fire areas in Victoria, including East Gippsland and Alpine areas, connecting into a mega-fire.

“That doesn’t mean to say all that area will be full of flames. There will be fire edges. But again, just don’t be around there when that happens,” Mr Crisp said.

There was mixed news for Mallacoota on Thursday, with the arrival of much-needed supplies at the cut-off town in East Gippsland quickly followed by the revelation that a sandbar has blocked sea access.

After the final 200 evacuees from Mallacoota arrived near Melbourne on a Navy ship on Wednesday evening, local MP Darren Chester on Thursday said those who chose to remain were in “great spirits”.

Deliveries of milk and fresh produce arrived via the ADF on Wednesday, Mr Chester said, with roads into the town still closed.

“We were able to provide today four 200-litre drums of unleaded fuel for the public to access, to maintain that little bit of comfort they may have until power is restored to the town,” he said.

Further supplies in the forthcoming days will be delivered by air. Major General Jake Ellwood revealed on Thursday that a growing sandbar has stopped the Navy’s landing craft reaching Mallacoota’s shore.

“I’ve been told [clearing it will take] between three and five days, though I did say to the team that are doing it, the quicker the better,” Major General Ellwood told reporters in Canberra.

On Thursday afternoon Mr Andrews visited an army barracks in Wodonga which is housing 160 displaced people.

The Premier said he had spoken to East Gippsland residents in the past few days who stayed in their towns despite evacuation orders then later “wish they had left”.

“The intensity and ferocity of the fires has been startling, shocking people … even those who are veterans, who have been around fire in particular landscapes and communities for a very long time,” Mr Andrews said.

Bairnsdale CFA incident controller Brett Mitchell said on Thursday afternoon that none of the recent fires in the East Gippsland area have been started by arson.

Air quality in parts of Melbourne deteriorated to “poor” on Thursday as smoke from the bushfires again drifted across the city.

Sophie is a homepage editor, digital journalist and producer for The Age.

Previous How Prince Harry and Meghan will fund their split from the royal family
Next Top talent will feature in AFL bushfire disaster match: Dangerfield