Breaking News
Home / Environment / ‘They’ve got nothing to go back to’: San Diego Zoo helps in Blue Mountains koala recovery

‘They’ve got nothing to go back to’: San Diego Zoo helps in Blue Mountains koala recovery

admin 2 weeks ago Environment Comments Off on ‘They’ve got nothing to go back to’: San Diego Zoo helps in Blue Mountains koala recovery 13 Views 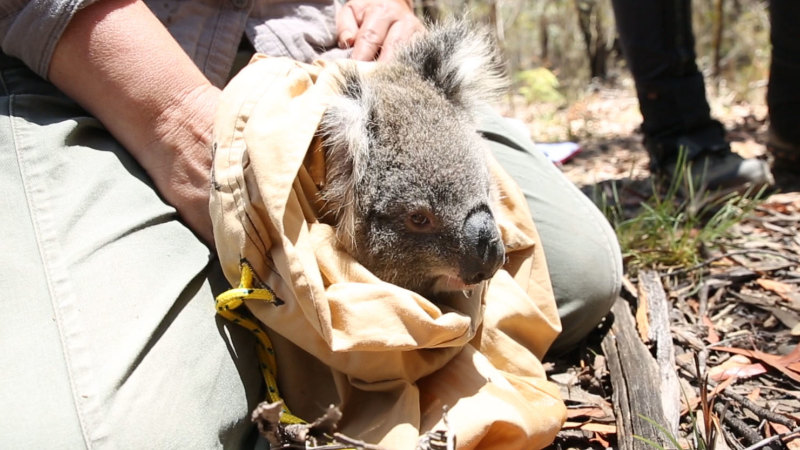 “Their habitats have been removed, they’ve got nothing to go back to to eat, and a lot of the creeks and rivers are dry. We need to start dealing with that problem,” she said.

The long-term goal will be to return the koalas that were rescued to the wild and to allow the population in the region to recover.

Dr Leigh was part of a team that successfully rescued a dozen koalas from the area just before Christmas, some of the “most genetically diverse [koalas] in the country”.

“They’re also chlamydia-free, which is quite a rare thing. They’re only one of two [chlamydia-free] populations that we know about in NSW,” Dr Leigh said. The other is in the Campbelltown area.

“Kellie and her team acted heroically, in the face of a mega-fire event, to save individual koalas who may be important to maintaining sustainable populations of the species in the future,” Dr Alberts said.

“It is this dedication to saving species that characterises the conservationists that work with us. We are tremendously grateful for their efforts, and we know that they have a lot of new work to do, to recover the species in the Blue Mountains.”

Dr Leigh estimates two-thirds of the Wollemi-Hawkesbury koala population has been lost, several other populations around the state have been decimated and there is “tremendous concern” regarding species and habitats once the bushfire season ends.

“Historically, small wildfires have occurred naturally without devastating an entire population. In our modern world, climate change is acting as a threat multiplier, creating scenarios where species are pushed suddenly to the brink of extinction and need immediate human intervention to help them survive,” said Dr Megan Owens, San Diego Zoo’s director of population sustainability.

While the number of total animals killed as a result of the bushfire season won’t be known for some time, scientists fear it may already be in the billions.

The last remaining habitat of the long-footed potoroo, a critically endangered miniature kangaroo, was right in the path of fires, while other endangered species likely to have been affected include the spotted-tail quoll, brush-tailed rock-wallaby and corroboree frog.

Previous Killer husband’s ‘to do list’ included chores, what to do with a dead body
Next ‘Far greater than ourselves’: AFL players urged to embrace bushfires appeal clash

Australia emits 1.2% of the world’s greenhouse gases. So who must act to cut emissions?