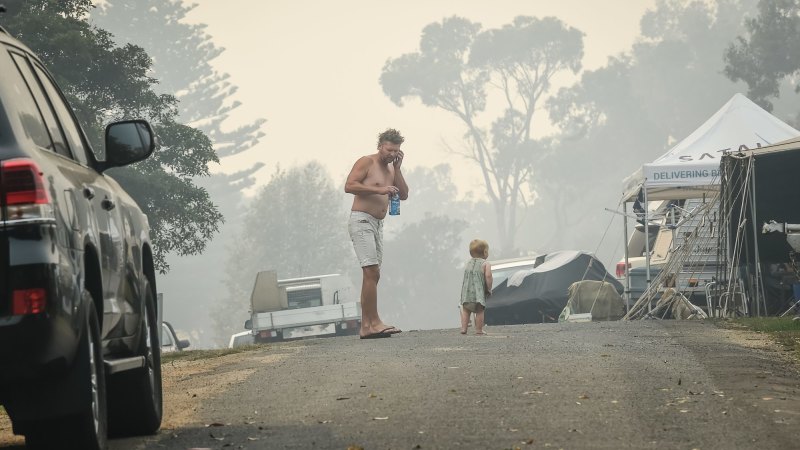 He said that once it was safe the agency would do everything it could to encourage people to visit communities affected by fires.

“We acknowledge that the Victorian tourism and events industry is feeling the impact of the bushfires, particularly small businesses that rely on summer trade,” Mr McClements said.

“That’s why we’re focused on driving home the message that the best way to support our tourism industry is to visit areas not impacted.”

Acting Tourism Minister Marlene Kairouz said the government was listening to local operators and tourism boards in response to immediate problems and to develop a longer-term strategy.

“The bushfires have had a devastating impact in East Gippsland and the north-east and tourism operators are doing it hard,” she said. ‘’In East Gippsland, we are working closely with the shire council and efforts to re-stimulate the local economy are at the forefront of our thinking.”

The state government yesterday confirmed that the East Gippsland fires had burnt about 900,000 hectares.

East Gippsland is the worst-affected of the Gippsland region, but local mayor John White said it was too early to determine the extent of the losses.

He feared some less well-established tourism businesses might struggle to survive the fires.

“The tourism industry has taken a really big hit. There’s absolutely no doubt about that,” he said.

But Cr White said he was confident tourists would return when the region was safe.

The council has set up a relief agency that tomorrow will begin work to help people affected by bushfires to get access to support packages, he said. Cr White hoped this program would help determine how many businesses were suffering from the fires.

Tourism board Destination Gippsland has also established a response and recovery group to deal with the fires damage. The group’s chief executive, Terry Robinson, said much of Gippsland was unaffected by the fires. He said people could book now and travel later if they were concerned about safety but wanted to support the tourism sector.

Leongatha Caravan Park co-owner Victor Boscoe said many customers had cancelled their bookings even though the nearest fires were more than 200 kilometres away.

Business had declined particularly among international travellers who stopped by the park in their camper vans, he said.

“That has really slowed right down,” he said.

Mr Boscoe said only three of the park’s 35 spots were currently occupied.

At Wilsons Promontory, Promhills Cabins owner Angela Taylor said until now there had not been a January vacancy at her business since she began running it 13 years ago. She said her business, which includes five cabins, was nowhere near the East Gippsland fires.

While the cabins were currently full there were no new bookings for later this month.

She said other local businesses and tourism operators also were suffering.

“Everyone I’ve spoken to has had a downturn,” she said. “Everyone is feeling this.”

Loch Sport Caravan Park co-owner Raymond Johnson said his business had been “dramatically” affected by the bushfires even though it had not come under direct threat.

Mr Johnson was quick to point out that others in the region were suffering far worse, but the fires were having a major financial impact.

He said the camping ground in East Gippsland had about 220 sites but on Saturday there were only about 40 people in the entire park.

Mr Johnson said the local boat ramp would usually be full on a warm January day, but on Saturday there was nobody. “There’s not a car to be seen.”

He insisted the park was not at immediate risk of bushfire but said he understood people who had cancelled their bookings because they feared for their safety.

“They’ve got to feel safe, otherwise it’s not a holiday.”

The Nationals MP for South Gippsland, Danny O’Brien, said tourism operators had reported that people were cancelling holiday plans for fear of fires and smoke.

“Gippsland is a big place and the fires are hundreds of kilometres from South Gippsland,” he said.

He urged holidaymakers to check with their accommodation providers if they had safety concerns.

“We don’t need the areas that aren’t affected to be economically impacted as well.”