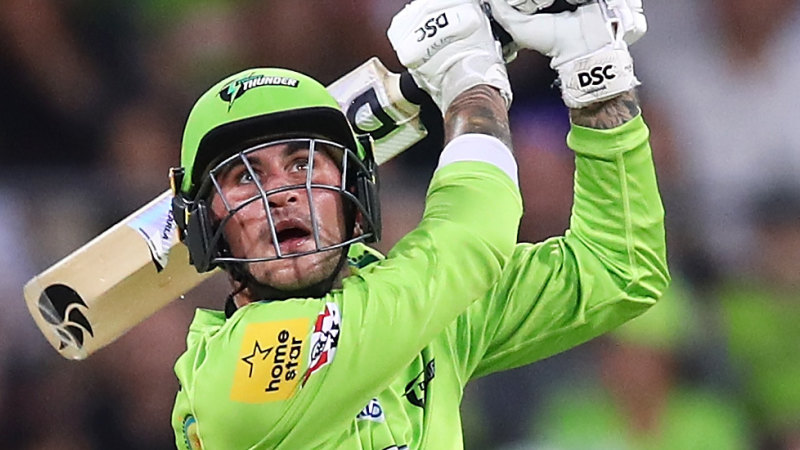 After what has been a moderate Big Bash campaign by his standards, Hales brought up his 50 from 28 deliveries before being caught in the deep shortly after for 55.

Hales took a real liking to Qais Ahmad early on and smacked the Afghan spinner for three boundaries in an over to stamp his authority in the chase.

The English import certainly extinguished concerns about a tricky pitch by backing his hitting and going aerial regularly with the fielders up. He also played more traditional cricket shots and picked gaps intelligently.

“I’ve felt in reasonable touch without getting that big match-winning score and tonight was the same I guess, I would have loved to have gone on a bit deeper if I could be a bit critical but I feel in good touch,” Hales said. “I think maybe the pitch got a little bit better under lights and came on a little bit more. Fortunately we managed to get ahead of the eight ball.”

Usman Khawaja (35 from 29) and Alex Ross (32 not out from 22) chipped in to keep the Thunder ahead of the run rate and eventually over the line with relative ease, even though they still needed four from the final over.

With three balls remaining, Ross crunched a cut shot to send a home crowd of 11,454 into raptures.

Earlier, the Thunder’s decision to not open the bowling with leading wicket-taker Daniel Sams was a little perplexing as the visitors started at a decent rate, reaching 0-51 at the end of the power play.

After Wade departed for 16, it was even more odd that Hobart brought in Simon Milenko at No.3, who had previously made 32 runs for the tournament at an average of 5.3.

One would have expected Milenko to come in as a pinch hitter to get the run rate up but he dawdled along, knocking around singles at less than a run a ball without taking any major risks.

To make matters worse, Milenko did not go on with it as he was bowled by Chris Morris for 17 off 21 deliveries. At that point the Hurricanes had not found the boundary for 40 balls.

“I though Milly might have come out a little bit harder but he was just sort of dinking them around,” said Khawaja during play on Fox Sports. “It worked in our favour.”

Bailey, who was dropped earlier on nine by Ross in the deep, then bombed a couple of back-to-back sixes to lift the tempo and kickstart the innings.

His dig of 43 from 30 balls was important before yet another BBL howler – Bailey clearly hit the the ground and did not edge one behind off Sams – reinforced the need for DRS.

Fans watching on television and at the ground are crying out for the technology.

Asked about his dismissal and confused reaction, Bailey said: “I was disappointed I didn’t hit it over cover for six.”

Clive Rose’s late cameo of 14 from five balls and McDermott’s measured innings of 33 lifted the Hurricanes to a total of 6-162 that was far more the visitors initially looked like making.

Sams was the best of the Thunder bowlers with 2-29 from his four overs, taking his tournament tally to 17 wickets.

Meanwhile, banned tweaker Chris Green was spotted walking by the boundary after scoring 17 runs at No.3 for club side Manly-Warringah against Blacktown.