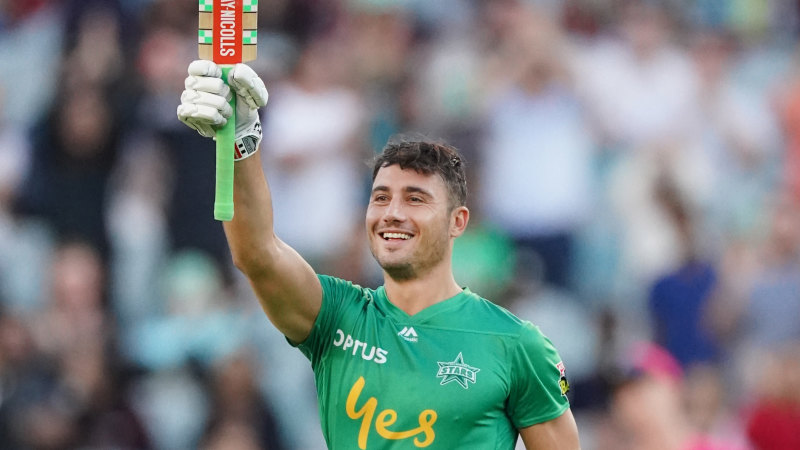 Ben Dwarshuis (0-61 from four overs) and Tom Curran (1-58 from four) bore the brunt of the Stoinis onslaught, conceding overs of 24 and 26 runs respectively.

Stoinis and fellow opener Hilton Cartwright put on 207 for the first wicket to also easily beat the record for the BBL’s highest partnership, set in 2012 by former Stars openers Luke Wright and Rob Quiney.

Wright – a member of the Stars’ support staff – and Quiney, in commentary, were both in attendance on Sunday night to witness their record fall.

Stoinis’ innings was also the highest professional men’s T20 score on Australian soil, overtaking Shane Watson’s 124 not out for Australia against India in 2016.

The opening stand finally ended when Cartwright (59) holed out to Jordan Silk at midwicket from the first ball of the 20th over, bowled by Curran. As if things weren’t bad enough for the Sixers, that brought the red-hot Glenn Maxwell to the crease, with the Stars captain duly sending the first ball he faced through mid-off for four.

The Stars’ total in the top of the table clash was the third-highest team score in BBL history.

Stoinis had already entered the match possessing the golden cap as the tournament’s leading runscorer and by the end of his clean-hitting masterclass the West Australian had moved to 478 runs for the season, opening a break of 159 on second-placed Shaun Marsh of the Melbourne Renegades. Stoinis celebrated his ton by placing his helmet on his bat before raising the willow, a celebration borrowed from West Indian veteran Chris Gayle.

The records would not have tumbled if not for Stoinis’ omission for Australia’s one-day tour of India this month.

The all-rounder was dropped from the national side following a poor World Cup.

The innings also came just a week after Stoinis was fined $7500 for making a homophobic slur towards Renegades bowler Kane Richardson.

Since being promoted to open the Stars’ batting on New Year’s Day 2019, Stoinis has made nine scores of 50 or more in 19 BBL innings.

A run chase which always looked ambitious was derailed early after Sixers opener Josh Philippe skied a short ball from Daniel Worrall to fall for four in the first over.

The hosts weren’t faultless in the field, with Englishman James Vince dropped both by Clint Hinchliffe and Worrall before falling to a Hinchliffe half-tracker for 16.

Sixers captain Moises Henriques (41 from 25) showed some resistance but when he became spinner Hinchliffe’s second victim of the night – caught in the deep in the 11th over – the Sixers had slumped to 4-93 and were going to need a miracle which never came.

West Australian tweaker Hinchliffe, given the chance in the international absence of Adam Zampa, finished with an impressive 3-20 from his four-over allotment, also removing Justin Avendano.

A late flurry from Dwarshuis (42 not out from 17) added respectability to the final margin.

The Stars are now two games and a hefty net run-rate differential clear in first place, leaving them in pole position to host “the qualifier” on January 31. The winner of that match will secure hosting rights for the BBL final, as well as the bushfire relief curtain-raiser, meaning the likes of Shane Warne, Ricky Ponting and Adam Gilchrist are a strong chance to be taking to the MCG next month.