The Sydney suburbs where rainfall is at its lowest on record 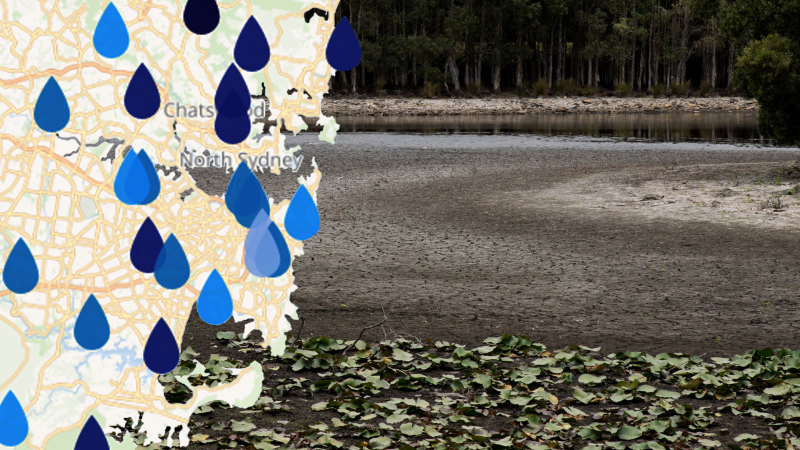 The least precipitation in Sydney fell at Randwick Racecourse (42.5 mm), while both Prospect Reservoir and Centennial Park had just 44 mm. Cessnock Airport received only 14.8 mm, less than eight per cent of the average rainfall there.

2019 was both the warmest and driest year on record in Australia, with a national average rainfall of just 277 mm, and temperatures 1.52 degrees above average.

Senior lecturer in the School of Earth Atmosphere and Environment at Monash University, Dr Ailie Gallant, said the South Coast often escapes the worst droughts because easterly winds force moist air from the ocean up over the Southern Highlands in spring and summer, dropping rain as the air cools and condenses.

“This year the winds have been predominantly westerly so, instead of bringing moist air from the ocean, very dry air from drought-affected areas inland is being funnelled over the mountains,” Dr Gallant said.

One of the conditions behind the year’s severe dry is likely to occur less frequently in the future. This is called the “Southern Annular Mode” (SAM) which affects the entire Southern Hemisphere and, in the last couple of months, has caused strong westerlies around Sydney, Dr Gallant said.

“A belt of mid-latitude westerly winds has effectively been dragged much further north than normal, toward the equator, (this) is called a negative SAM,” Dr Gallant said. “Climate models suggest that these strongly negative SAM conditions will become less likely (as) those mid-latitude westerlies are likely to move further south, toward the poles.”

“Research from the CSIRO shows the storm tracks that used to come from the Southern Ocean aren’t reaching as far and this could be impacting the Sydney region,” Dr Holmes said.

The forecast for January is for about 50-100 mm of rain to fall across most parts of Sydney, but there is no significant rain on the horizon.

More than 85 per cent of Sydney’s water is supplied by captured rainfall and dam levels dropped below 43 per cent yesterday, their lowest level since the Millennium Drought.

Level 2 water restrictions began last month across Sydney, the Blue Mountains and the Illawarra. This means gardens can only be watered before 10am or after 4pm with a watering can or bucket, hosing of hard surfaces is not allowed, cars can only be washed with a bucket or at a commercial car wash, and a permit is required before filling pools of any size.

Australia emits 1.2% of the world’s greenhouse gases. So who must act to cut emissions?