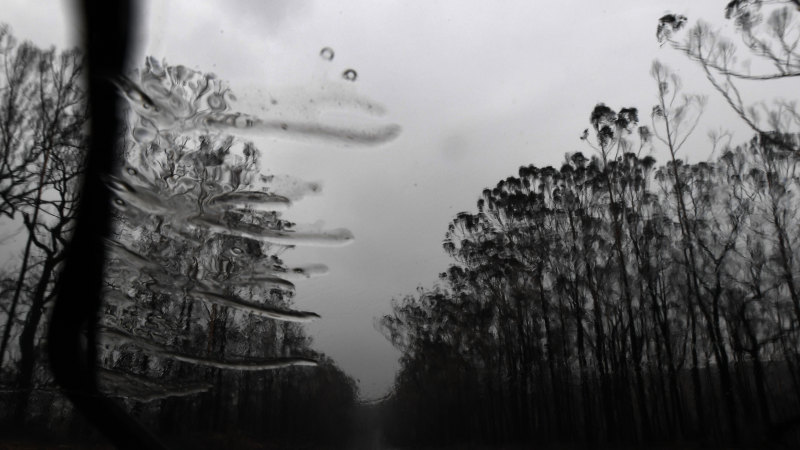 She said the much-anticipated showers and storms are forecast to develop across eastern Australia, with the potential for heavy rainfall in some places including fire sites.

Although this is good news it does come with risks, Ms Scully warned.

“Heavy rainfall and gusty thunderstorms bring the potential for flash flooding, particularly in the burnt-out areas of NSW and Victoria which are now vulnerable for landslips and trees coming down,” she said.

While it’s difficult to predict where the most rain will fall, the bureau said the storms are likely to be slow-moving and accumulate 30 to 80 millimetres of widespread rainfall over the next few days.

The Rural Fire Service (RFS) is hopeful for heavy rain in the areas that need it most, with spokeswoman Angela Burford saying scattered rain would only hinder firefighting efforts.

“We’ve got more favourable conditions and rain predicted this week, but there’s less of it down south, where we’ve still got very high fire danger,” she said.

“In a lot of cases the rain isn’t quite enough yet – but we’re certainly hoping that the rain at the end of the week is heavy and falls across fire grounds.”

More than 2000 firefighters were on the ground, supported by 598 vehicles and more than 100 aircraft.

Significant rainfall after bushfires can trigger water quality concerns as ash and debris risk being swept into reservoirs.

“The recent fires threatened significant water infrastructure at Warragamba. While much of the catchment has been affected by fire, work by WaterNSW along with the RFS helped prevent damage to the infrastructure,” she said.

“Silt curtains and floating barriers help to mitigate the inflow of ash into dams, reducing additional pressure on water treatment plants. WaterNSW has an additional 1000 metres of silt curtains in case they are needed in either Nepean or Tallowa dams.”

Scientists will continue to monitor water quality in major water supply areas around the clock.