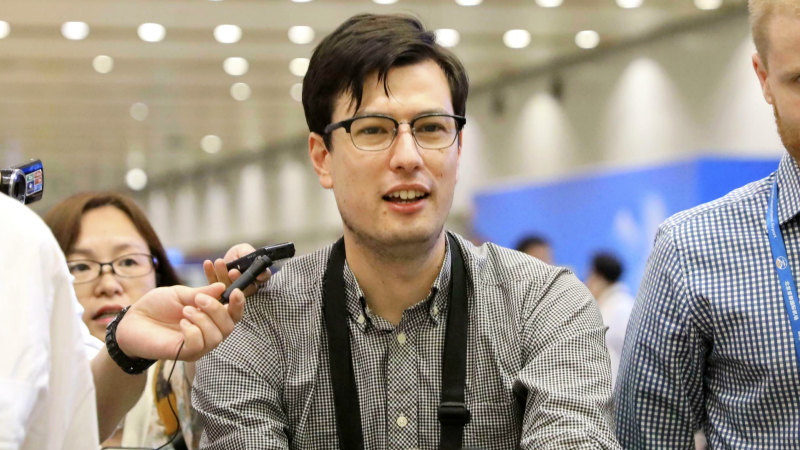 Beyond denying that he was a spy and saying he was sad to have lost access to North Korea, Sigley has not previously publicised details of his detention.

In his first-hand account carried by a South Korea magazine, Sigley said that what appeared to be agents from the Stasi-like State Security Department, known as bowibu, “kidnapped” him from his dorm at the university.

“I was innocent but they filed false charges against me,” he wrote, without elaborating.

“They endlessly tried to teach me some kind of lessons by forcing me to make a written confession which was a concoction of fabricated evidence and crimes and illogical legal reasonings.”

Sigley said on Twitter on Wednesday he had avoided speaking directly to the media in favour of telling his story “in my own words”.

They endlessly tried to teach me some kind of lessons by forcing me to make a written confession which was a concoction of fabricated evidence.

The article was printed in North Korea Monthly, published by the Seoul-based North Korea Research Institute, and included stories from his childhood and details about the lives of international students in North Korea.

During his detention, Sigley said he had “no idea” when he would be released because he was “completely cut off” from the outside world, while Australian officials were scrambling to secure his freedom with other countries.

“They succeeded in teaching me one lesson: the falsehood of the North Korean legal system,” he said.

During his time in North Korea, Sigley had published articles about daily life for NK News and other specialised websites.

The treatment of foreign citizens by the secretive North has sometimes become a geopolitical issue.

The death of American student Otto Warmbier in 2017 following his 17-month detention in North Korea lead to a spike in tensions between Washington and Pyongyang.

Warmbier was detained in 2016 and sentenced to 15 years of forced labour after being accused of trying to steal a propaganda poster in his hotel. He was returned to the United States in a coma and died soon after.

North Korea, heavily sanctioned over its nuclear weapons and missile programs, has expressed frustration at stalled denuclearisation talks with the United States.

US officials say North Korea must take more concrete steps to dismantle its weapons programs before sanctions can be eased.

Previous ‘We were all in shock’: Archer’s hit on Smith revisited in CA documentary
Next Liberals speak out to back Science Minister on climate change action

Salads should be messy ‘portals for discovery’, not a convenient takeaway for the ‘cubicle class’

Like Canberra, Washington DC is often used as a synonym for politics and politicians. As …