admin January 15, 2020 Sport Comments Off on An open and shut case for Tennis Australia to clear the air 80 Views 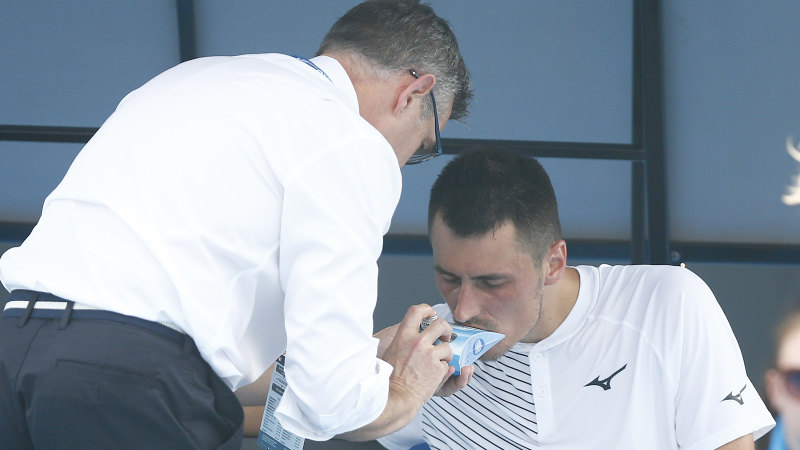 Yet the sight of players doubled up in distress at the Rod Laver Arena and at the Kooyong Classic, where Maria Sharapova and Laura Siegemund took it on themselves to call off play, is an indictment of Tiley’s assessment.

Construction workers were ordered off the job on Tuesday due to poor air quality and visibility issues on high-rise jobs. Public swimming pools closed. So, too, beaches, where Life Saving Victoria was concerned about the inability to see swimmers in the water. And Racing Victoria cancelled its thoroughbred race meeting at Caulfield on Wednesday and elected to reschedule others.

Tennis Australia said its decision to proceed with play was made after consultation with the Women’s Tennis Association and the Association of Tennis Professionals (the governing organisation for men’s tennis globally). It said both organisations were content for play to go ahead.

If so, all three organisations need to get real. They need to recognise the serious health implications that can develop even for elite athletes when oxygen levels are insufficient and toxic particles are inhaled.

This should not be an economic trade-off, one that weighs the adverse health effects against the loss of tournament income, broadcasting commitments or tourist revenue. It should be a simple assessment of health risks.

It is extraordinary, though, that Tennis Australia’s risk-assessment teams and its board have not produced a policy to guide what should occur if air quality falls to very poor or hazardous levels.

Victoria’s Chief Health Officer, Brett Sutton, has urged Tennis Australia to implement a policy concerning air quality. He has even offered to assist. Tennis Australia should jump at the chance and publicise an official policy.

A policy that assesses the air quality based on conservative benchmarks should be part of a broader risk assessment policy that takes into account the profound effects of climate change on the playing environment, including hotter days and possibly extended periods of toxic air.

As well, Tennis Australia should compensate any player who has been eliminated from the event as a direct result of his or her inability to deal with the polluted air.

Tennis Australia generated $370 million last year from its various events around the nation, the signature piece being the internationally renowned Australian Open, which begins in earnest next week.

The world has already been watching Australia’s response to the bushfires. It would be a national embarrassment if the world were now to witness a top-level tournament that required players, court-side staff and assistants to endure excruciating, but entirely avoidable, conditions.

Previous Everything is black and burnt: ‘It was like a raging ocean’
Next Supermarkets won’t commit to lifting prices to support farmers after fires

To play or not to play, that is the question

But a smaller increase is still an increase. The numbers are still rising. The peak …