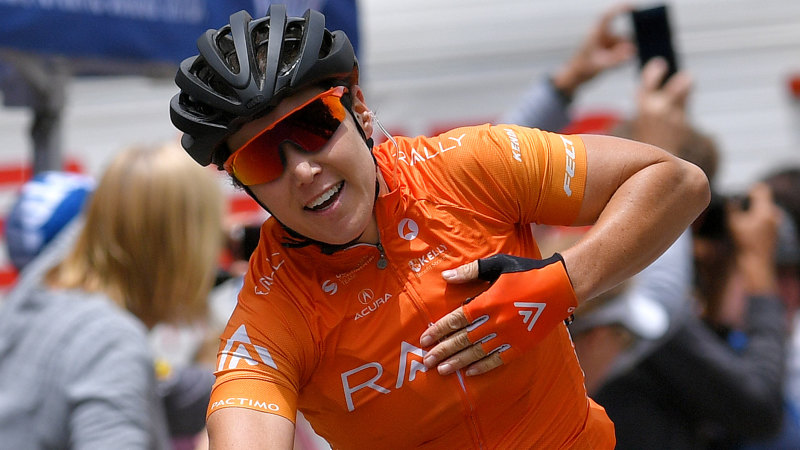 She will wear the ochre jersey in the 114.9km stage two on Friday.

“It feels great and I’m trading one orange jersey for another now,” Hosking said.

“I’m super stoked. It means a lot that the team’s come over here to support me and the girls were incredible today.

“I’m really pleased that I can already give them back a UCI win and it’s a great start to the year from Rally Cycling.”

Hosking is in excellent form as she attempts to break the Mitchelton-Scott team’s four-year grip on the overall crown in the January 16-19 Tour.

She won two stages and the overall title at the Bay Crits this month before taking out the Australian criterium title in Ballarat last week.

Most of the field, including three-time defending champion Amanda Spratt (Mitchelton-Scott), is 11 seconds behind Hosking in the general classification.

Hosking’s performance on Thursday was even more impressive given the fact she was riding one teammate short.

“We were committed to the sprint for me and I just asked the girls to keep me out of trouble leading into the last 15km and get me into this quite technical section with 1.5km to go at the front,” Hosking said.

“I knew I was going to use them early so then I said I would just jump trains, and that’s exactly what we did.

“We really executed the plan today and I’m really proud of the girls.”

National championships runner-up Justine Barrow (Roxsolt Attaquer) was one of three riders who hit the bitumen in a crash that occurred just inside the final 3km.

None of them appeared to suffer any significant injuries.