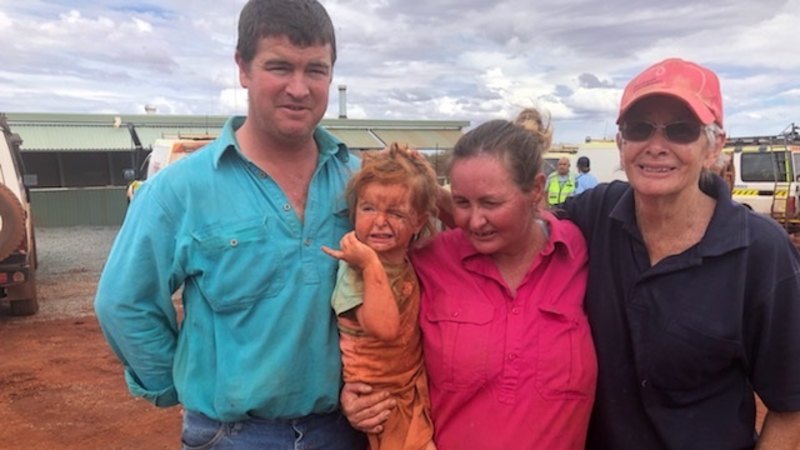 “That creek rose due to heavy rains in the area trapping Matilda [and her dog] on the other side of the creek from the homestead,” he said.

When the alarm was raised Matilda was missing, the response was immediate.

On Thursday, nine police officers, eight state emergency service personnel and three helicopters all descended on the property as the frantic search for Matilda began, and it wasn’t long before word of the missing girl had whipped around the small Nullagine community.

Pilbara locals chipped in station helicopters for the search, and the Newman Horse Riders Association brought in seven horses and riders for the massive task of scouring the 368,315 hectare station.

“At first light we continued to search feverishly for her. The community came together like you wouldn’t understand [and] it’s just amazing,” Mr Massam said.

After nearly 24 hours – as the mercury tipped at 35 degrees and rain began to fall on the station – Matilda was spotted by a helicopter walking about 3.5 kilometres south of the homestead.

Her Jack Russell was still by her side.

“It’s just an amazing feeling. I’ve had my team out there on the phone just elated. I can only imagine how excited the family was,” Mr Massam said.

Covered in mud, looking considerably less happy than her exhausted parents, little Matilda was reunited with her parents on Thursday afternoon.

Mr Massam said while it still wasn’t clear why Matilda had wandered off, she had been incredibly lucky to survive.

“Matilda, she’s a young station girl growing up on the station. I’m sure she’s a free spirit and her backyard is probably millions of acres,” he said.

“It had rained out there the station was inundated with water and very fortunately she didn’t succumb to any of the creeks that we were very concerned about.”

Mr Massam also credited Matilda’s Jack Russell for her survival, and said he would likely be a station hero for his part in her adventure.

“That little puppy stayed with her that whole time, alongside her through what was an unsheltered evening where Matilda spent the night alone,” he said.

WA police thanked the Pilbara community for their support in finding Matilda, and Mr Massam said Matilda’s story was an “amazing” example of how locals pulled together.

“As a new person to the Pilbara it just excites me that we have this strength to come together in the times of need,” he said.

“I saw it today and it’s just amazing.”

Hannah Barry is a journalist for WAtoday.

Previous The swastika is a symbol that must be banned
Next Trump knew about Ukraine pressure, Giuliani associate Parnas says

Bodies of US firefighters retrieved as cockpit recorder may give answers

Wreckage from the C-130 Hercules was scattered for more than a kilometre over charred bushland, …