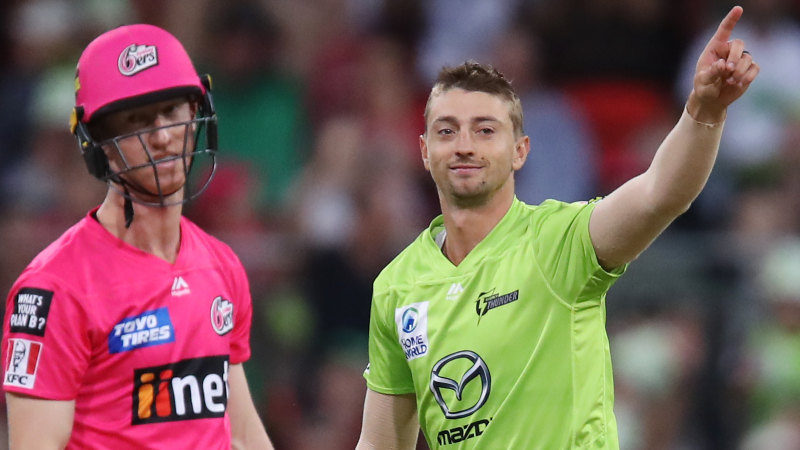 Justin Avendano (28 from 31 balls) and Ben Dwarshuis (19 from 20 balls) dug the Sixers out of a massive hole but they were bowled out for 76, their second-lowest total in the Big Bash.

Daniel Sams was the pick of the Thunder bowlers with 3-14 from three overs and took his season wicket tally to 20.

The Thunder were set a revised target of 75 from 16 overs due to the weather and despite the loss of Alex Hales for a golden duck and Usman Khawaja for 14, managed to sneak ahead of the par score when rain set in just before 10pm.

Had the Sixers snared a wicket on the final few balls before the frustrating rain returned, they could have pinched an unlikely victory. They will kick themselves for not making more runs.

It was a fair outcome for the Thunder, who had a game called off in Canberra against the Strikers due to bushfire smoke.

The result means the Thunder leapfrog both the Brisbane Heat and Perth Scorchers into the top four, just two points behind the Sixers (13).

The Thunder bowled first after winning the toss and their decision was certainly justified as the Sixers slumped to 2-1 thanks to some brilliant footwork – yes, footwork – from Chris Morris and a beautiful first-up seed from Gurinder Sandhu.

Dan Hughes was run out for a duck after getting into a horrible mix-up with Josh Philippe. As he scrambled to get back to the striker’s end, Morris came through and booted the ball with the inside of his right foot which hit the stumps and caught Hughes short, just like a soccer striker into the bottom left corner.

Then next over, Sandhu, with his first ball of the Big Bash season, blew Philippe’s pad off to put the Thunder’s cross-town rivals in big strife.

Things got even worse after the first rain delay when Moises Henriques edged a nasty rising delivery off his glove to first slip.

The Sixers captain looked furious as he trudged off before more rain forced players off again with the men in magenta reeling at 3-6.

While the rain did not appear to be particularly heavy, umpires were quick to have the covers put down and wary of a player injuring themselves.

Former Cricket NSW chief executive Andrew Jones, once slapped with a $3000 suspended fine for publicly criticising a decision by Cricket Australia to abandon a one-day domestic match on social media, tweeted his frustration as a spectator at the Sydney Showground.

“The umpires have totally lost the plot here,” Jones wrote. “You wouldn’t go off in a Grade game for this rain.”