Race-by-race tips and preview for Taree on Monday

admin January 19, 2020 Sport Comments Off on Race-by-race tips and preview for Taree on Monday 40 Views 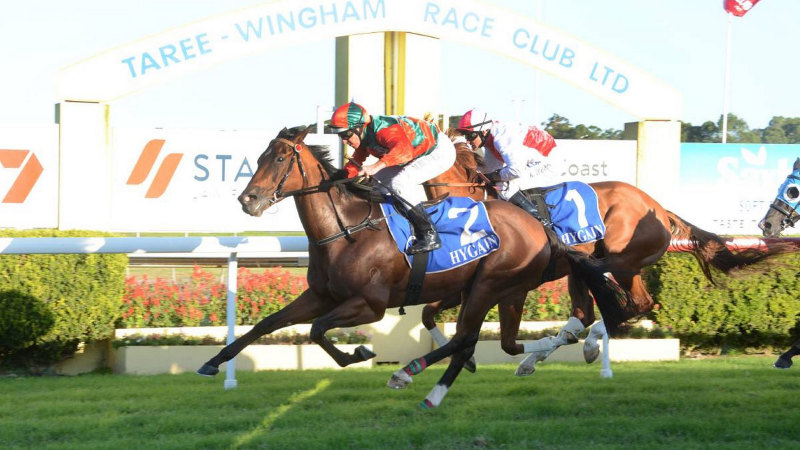 Very tricky dash for the maidens with some first starters, and a few key ones Any betting move will be significant for four-year-old Muswellbrook mare 1. Stars Don’t Lie who resumes off a long break, but has trialled OK for a good sprinting stable and looks ready after being scratched from home track meeting on Sunday.
Dangers: Three-year-old Wyong filly 7. Dreams Out West was well beaten at 100/1 in two tougher runs on the speed before Christmas, but improved sharply to just miss at Port Macquarie before winning a trial so looks to finally have her mind on the job, and should handle the ground. Three-year-old gelding 3. Glendor resumes off a seven-month break, showed significant improvement in a recent trial, and stable is having a good run. Again look for any market move with debutante three-year-old Scone filly 5. Yawkyawk (Wandjina x Spooked by Scaredee Cat) who was out the back in a Rosehill trial before Christmas, but leading trainer/rider combination can’t be underestimated and she’s bred to get through the ground. Include six-year-old Scone gelding 9. Fort Jackson who resumes off a fair trial in wider exotics.
How to play it: Stars Don’t Lie to win and first four 1,3,7/1,3,5,7,9/1,3,5,7,9/1,3,5,7,9.
Odds and Evens: Odds.

Testing sprint for the boys at set weights, but six-year-old Gosford gelding 4. Jay’n’jay can pay back punters fourth-up this prep from a good draw. Loves to park right on the speed, and ran three straight second placings to start the prep before swamped late this track as a well fancied favourite. Bred to handle the conditions and the blinkers come off.
Dangers: Big watch on four-year-old Newcastle gelding 7. Solano (Fastnet Rock x Cierzo by Centaine) who is on debut in blinkers for leading provincial stable, and has had two quiet trials. Include four-year-old Newcastle gelding 2. Freedom’s Fire resuming after two solid trials, and is bred to handle such ground.
How to play it: Jay’n’jay to win.
Odds and Evens: Split.

Now the girls’ turn over the same trip, and there are plenty of hopes headed by Wyong three-year-old 12. Toguchi who finished off nicely resuming at Muswellbrook when well backed, and this looks an ideal follow-up race. By a good wet track sire, and scratched from Muswellbrook on Sunday.
Dangers: Resuming Newcastle mare 2. Lochita has looked good in two 1000m trials, and is headed for better races. Debut was on a heavy track at Warwick Farm last July, and stuck on OK from the front. Just needs even luck from a wide barrier to be in the finish. Wyong three-year-old 9. Exotic Pearl resumes off a nice closing debut run at Tamworth last July, and has trialled OK. Another one first-up, Port Macquarie mare 5. Night Terror, hasn’t trialled, but reportedly working well, and has a real liking for rain-affected ground while Gosford three-year-old 7. Classic Gown returns from a nine-week break off a smart trial win, but is a query in the ground at her ninth start.
How to play it: Toguchi to win.
Odds and Evens: Split.

Good competitive battle. Four-year-old Newcastle mare 4. Scenic Site is ready to peak after three runs back against tougher opposition, and wet track form from last winter was strong.
Dangers: Six-year-old Wyong gelding 2. Foxdown hit the line nicely resuming at home, and has a good wet track record. Normally improves into his second-up run, although low draw in these conditions could be tough for one who likes to settle back in the field. Improving three-year-old Gosford gelding 6. Django Unreined has been hard in the market and close-up this grade in two runs back from a spell. Draws to be in the finish again, but is a query first time in this ground. Port Macquarie mare 7. Hard Ruler has been finishing OK in and around this class, but best form is in rain-affected going. Include another Port mare, 8. Our Girl Babs, whose recent form is only moderate, but she drops in weight, and has a real liking for wet tracks being by Clangalang who won a group 1 Derby on a soft 7 rating.
How to play it: Scenic Site each way and box first four 2,4,6,7,8.
Odds and Evens: Evens.

Plenty of chances in this one too. Improving five-year-old Wyong gelding 2. Midi is knocking on the door after three fast-finishing runs this prep, and sire won a group 1 over 2000m on a heavy 10.
Dangers: Four-year-old Gosford gelding 1. New Tycoon won his maiden in smart style at second career run before fighting on tenaciously at Scone after leading over the mile. Untested on wet tracks, but breeding is OK. Similarly, three-year-old Coffs Harbour filly 4. Dazzling Charm is progressing nicely in her first prep, and also suited stepping up to this distance, but first time on anything under a good-rated surface. Be shocked if the winner came outside these four.
How to play it: Midi to win and box exacta 1,2,4.
Odds and Evens: Split.

Open one to finish, but while four-year-old Gosford mare 1. Take To Heart looks to have a tough task resuming from a wide gate and carrying 61kg, but has had two solid trials, with the blinkers going on, and won only previous start in heavy ground. Well over the odds.
Dangers: Improving five-year-old Newcastle gelding 3. Titus has been close-up in two of his three runs this prep, but looks under the odds from a wide draw and first time on a heavy rating. Local four-year-old stallion and former Victorian 2. New Major did his best work late in first run for new stable, and will find this a little easier but weighted to his best.
How to play it: Take To Heart each-way.
Odds and Evens: Split.

Previous Seating plans for the knights of now
Next Emergency fire warning: Residents in two towns north of Melbourne told it’s too late to leave