‘Tragedy will be compounded’: calls for food drops for Victoria’s wildlife

admin January 19, 2020 Victoria News Comments Off on ‘Tragedy will be compounded’: calls for food drops for Victoria’s wildlife 60 Views 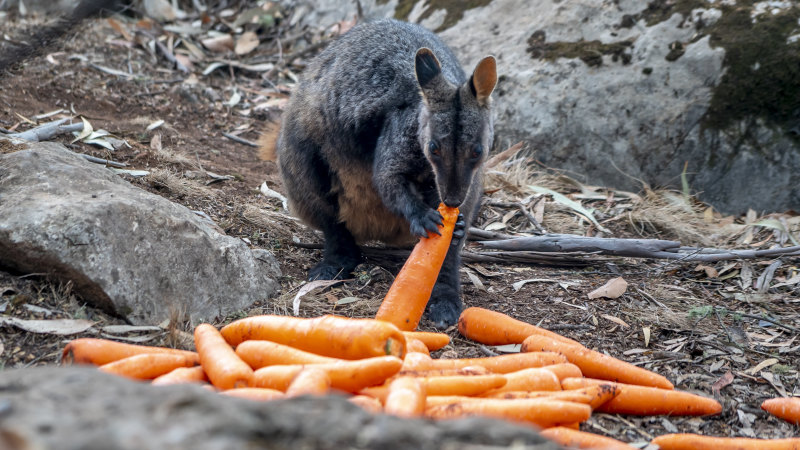 But large scale drops of food can have negative environmental effects, according to the Department of Environment, Water, Land and Planning, including encouraging invasive weed growth, spreading disease and discouraging animals from seeking habitats unaffected by fire.

It comes after the NSW National Parks and Wildlife Service dropped carrots and sweet potatoes into valleys and national parks last week to assist starving populations of the brush-tailed rock-wallaby.

Emergency Services Minister Lisa Neville said on Sunday that fire authorities had not been able to assess struggling populations of wildlife by the air due to smoke, and had been prioritising “human wellbeing”.

She said the government is now looking at how to deliver food to starving animals, without it “creating further issues for our wildlife in the future”.

“It’s not as easy sometimes as dropping food in. In fact when I was in Mallacoota the other day, one of the key issues people had was about introducing invasive species and weeds, which can happen through that as well,” Ms Neville said.

Scientists fear many billions of animals may have been killed by the bushfires that have swept across Australia’s south-east. More than 1.5 million hecares of land has been burnt in Victoria alone.

There are also live concerns for the koala and bandicoot populations on French Island, after a fire tore through the national park, which is a sanctuary for native wildlife.

Animals Australia said they had been corresponding with the government for a week about a monetary donation to purchase food, which would be taken into fire-ravaged areas by road and air-dropped.

CEO Lyn White said there are still “vast areas of Victoria” that non-government organisations cannot access as yet due to the fires, making airdrops of food an urgent solution.

“This is why we need the government to facilitate the food drops. We’ll provide the funds for food, we just need the logistical support,” she said.

“There has already been a catastrophic loss of wildlife due to these fires. This tragedy will be compounded if the food requirements of surviving animals are not prioritised and met wherever possible.”

Animals Australia has been feeding and caring for between 300 and 400 macropods – the mammal family which includes kangaroos and wallabies – in the fire-ravaged town of Mallacoota.

Opposition environment spokesman David Morris said wildlife in fire-affected areas had already been devastated, and “immediate action to prevent the mass starvation of wildlife that has survived” should be taken.

“Aerial food drops began over a week ago in New South Wales; it’s time that the Andrews Labor Government acts to ensure animals aren’t forced to starve to death,” he said in a statement.

Whilst the advice is normally to not feed wildlife, the “rare situation” of both severe drought and bushfires means that “desperate times call for desperate measures,” Australian Conservation Foundation (ACF) Nature Campaigner Jess Abrahams said.

Environment Minister Lily D’Ambrosio said the government was taking advice from a number of different agencies about potential food drops.

“We’re considering supplementary feeding for threatened species in targeted areas if and when it’s appropriate and safe to do so,” she said.

“We’re taking expert advice to get the best outcome for our native wildlife and biodiversity.”