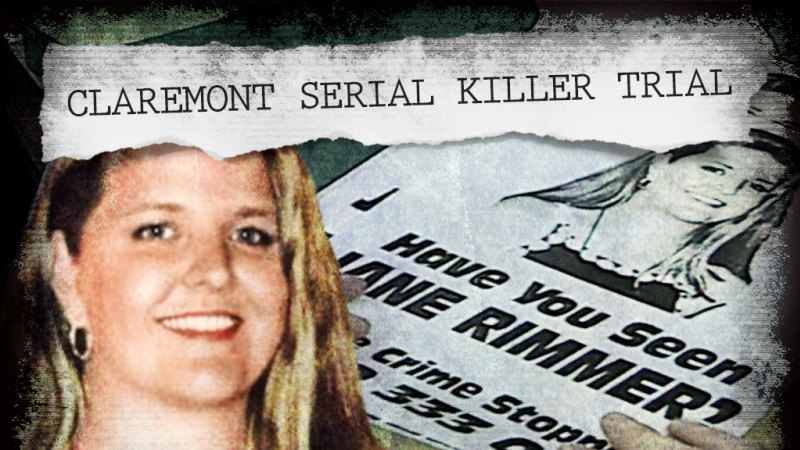 Court has adjourned for the day.

The defence will begin its cross-examination of Mr Bordin tomorrow.

Mr Bordin is now being shown the avatar sketches he filled out in relation to the post mortem of Ciara’s body.

It reveals a depressed fracture on the skull marked ‘trauma point – appears sharp instrument’, blood stains on the bra, tears to the left thumbnail and right ring fingernail.

Of the left thumbnail, which is one of the state’s critical exhibits, he wrote ‘Left thumbnail low, small sample’.

It also notes Ciara’s skirt was ‘torn in lining, lot of staining at rear portion’.

Traces of a tampon were also located.

Mr Bordin’s running sheet from his involvement in the examination of Ciara’s body and the post mortem that followed showed a toxicology report showed ‘nil drugs’ in her system.

Ms Barbagallo has again asked Mr Bordin if Ciara had shoes on when she was found, to which he has replied he cannot recall, but recalled her wearing a white t-shirt and black skirt.

Ms Barbagallo has now moved onto the post-mortem carried out on Ciara’s body on April 4, 1997.

He is recalling there were a number of people present, including the two criminal profilers engaged as consultants by the Macro Taskforce.

He said he stayed back for most of the post mortem, and only went into the area where it was being conducted to look at an item through a microscope.

The next witness is Inspector Mark Bordin, who was a detective senior constable assigned to the homicide squad in 1997 when Ciara’s body was discovered.

He said he arrived at the crime scene at 2.20pm with forensic pathologist Karin Margolius and Macro Taskforce detective Robert Kays.

He said he cannot recall the vehicle they travelled in.

“My role was to look at it from an investigative perspective to pass on any information and data to the investigative team,” he said.

Of the bushland where Ciara was found, he said there was a five metre exclusion zone set up to preserve the scene.

“A lot of people like to have a look and have a bit of a nosy, but obviously the people that needed to be there were inside that area,” he said.

He has been asked if Ciara was wearing shoes, to which he said he cannot recall.

He is now being shown eight polaroid photographs he took of Ciara’s body in bushland.

Mr Edwards has taken his glasses off while the sensitive images are being shown.

Mr Bordin has recalled writing two body tags labelled, ‘female, believed to be Ciara Glennon’ and handing them to Sergeant Barry Mott to place on the body.

After Ciara’s body was moved, he said he was present when two inches of soil from underneath was collected onto a blue plastic sheet.

He also said he remembers seeing the Coroner’s undertakers moving Ciara’s body from under a tree, within a body bag, into the back of their vehicle.

This evidence conflicts with the evidence of the Coroner’s undertaker, who said police placed the body bag on their gurney.

Mr Bordin said he and Mr Leembruggen then escorted the undertaker’s vehicle to the state mortuary.

He recalled two forensic pathologists inspected Ciara’s mouth region for the purpose of identification and then the body was taken to be stored in the morgue.

He said he at no stage touched the body.

Defence lawyer Paul Yovich has indicated he will not be ready to cross-examine Mr Leembruggen today, as he would like to review his evidence-in-chief once it is complete.

He acknowledges there may not be anything significant in the new information the witness may give, but that he will not know that until he has had a chance to review it.

Mr Leembruggen has been excused and will be recalled to be cross-examined at another time, possibly tomorrow.

He has been shown the exhibit list he wrote during the post-mortem on Ciara’s body.

Exhibit AJM54 – which is the critical hair exhibit – is written and then crossed out.

On a more filled-out, photo-copied version of the exhibit list the words ‘Head hair – string indicates rear neck’ are added to the AJM54 line.

The critical exhibit was then couriered to Anne Marie Furmedge in forensic pathology by forensic officer Adam McCulloch.

The court is taking a short adjournment for some legal discussion to be ironed out.

It involves the defence not being aware of all of Mr Leembruggen’s evidence.

In an ABC press conference in the days after Ciara’s body was discovered, David Caldwell, the US expert flown to Perth to provide his serial killer investigative expertise, said the following:

“This person is probably very bright, very much in control of himself, has all of the outward appearances of a very stable person.

“This is probably a very pleasant, normal appearing person.

“I daresay that when this guy is arrested, I guarantee that people are going to be absolutely astounded.

“They’re gonna say, ‘I worked with this guy. He’s my next-door neighbour. Surely it can’t be?'”

Mr Leembruggen has referred in his evidence today to Mr Caldwell being present at Ciara’s crime scene.

Mr Caldwell was head of forensics for the South Carolina police at the time.

Court is breaking for lunch and will resume at 2pm.

Ms Barbagallo has now moved on to the next day when Mr Leembruggen was present for the post mortem carried out on Ciara’s body.

“I was there just to observe, I did end up helping the forensic officers by taking exhibits for them. I was the scribe,” he said.

He said he was wearing detective clothing at the time, being black trousers, a light shirt, possibly a tie and leather shoes. He said he also had a white lab coat over his clothing, but could not recall if he wore disposable booties over his shoes that day.

He said he stood around two to three metres from the body and never touched the body.

Mr Leembruggen is now recalling attending the crime scene where Ciara’s body was found on April 3, 1997.

He said he attended with Detective Senior Constable Mark Bordin, Claude Minisini, who was an FBI-trained Victorian profiler brought in as a consultant for WA Police, and Dave Caldwell, a US police officer with experience in serial murder investigations flown to Perth to assist the Macro Taskforce.

Mr Leembruggen said the closest he got to the body was “probably a couple of metres” but that he was around three to four metres away from the body for most of the time it was being examined in situ.

He said he drove in convoy with the Coroner’s undertaker to the state mortuary, but did not assist in the removal of the body from the vehicle, into the possession of the mortuary.

He said the Coroner’s undertakers removed the body bag.

This evidence conflicts the evidence of the Coroner’s undertaker, who said police removed the body bag from the vehicle and transferred it to the mortuary.

He said the body bag was unzipped and Dr Stephen Knott spent about 15 minutes reviewing the body’s dental structure to confirm the identity.

“At that point they advised they could confirm the body was that of Ciara Glennon,” he said.

He said he was present, but standing quite far away, “in the doorway” when the examination took place.