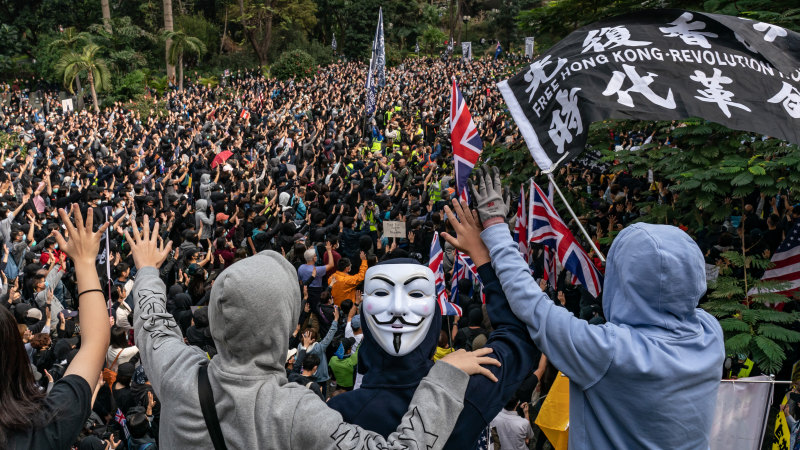 Police then ordered a halt to the protest and began dispersing the crowd.

“It was primarily rioters’ violent acts which led to the suspension of the gathering,” Senior Superintendent Ng Lok-chun told reporters.

“The organiser has violated the agreements set in the no objection letter, failed to assist in maintaining the order in the public gathering event, that is why we have arrested Mr Lau.”

In a statement late on Sunday, the government said it “strongly condemns” the attack on the police officers.

The “Universal Siege Against Communism” demonstration was the latest in a relentless series of anti-government protests since June, when Hong Kongers took to the streets to voice their anger over a now-withdrawn extradition bill.

Organisers said 150,000 attended the demonstration, while police estimated a crowd of 11,680 at its peak.

While the protests – now in their seventh month – have lessened in intensity and size in recent weeks, their frequency has held up.

Protests have evolved into a broader pro-democracy movement since they erupted in June in response to a now-withdrawn bill that would have allowed extraditions to mainland China, where courts are controlled by the Communist Party.

The bill was seen as the latest example of meddling by Beijing in the freedoms that were promised to the special administrative region when Britain returned it China in 1997.

China denies the claims and says it is committed to the “one country, two systems” formula put in place at that time, and blames foreign countries including Britain and the US for inciting unrest.