Policeman says he faced ‘suicide by cop’ as he restrained pensioner

admin January 20, 2020 Victoria News Comments Off on Policeman says he faced ‘suicide by cop’ as he restrained pensioner 76 Views 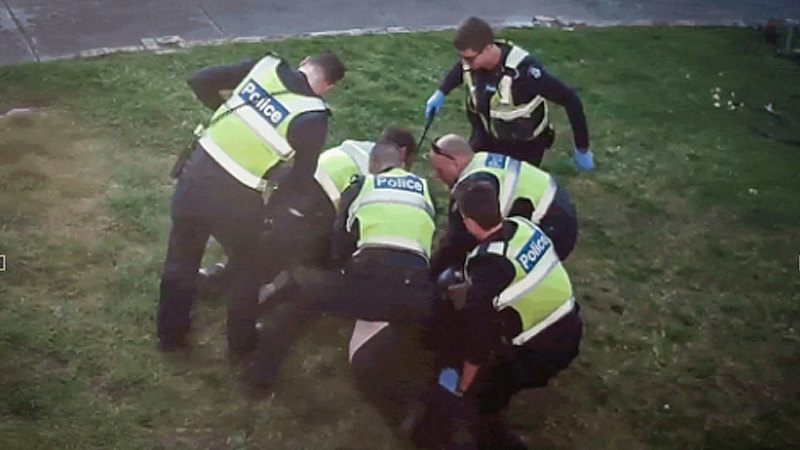 “I did believe it was a real suicide by cop scenario,” Senior Constable Edney told Heidelberg Magistrates Court on Monday.

The court has heard paramedics refused to attend John’s address without police escort.

Video footage shows John answering a knock by police at his front door that day, urging to be left alone.

“If you get the crowbar, you’ll have to shoot me.

“I’ve been maced before and nothing happened.”

“Part of the reason of going into his house was to check for weapons,” he told prosecutor Diana Manova.

“I did believe he was armed.”

However, he conceded he didn’t search him or make any reference to him being armed in his incident notes.

Footage shows officers pulling the pensioner to the ground and restraining him while Senior Constable Edney hits his calf with the baton six times and steps on his head with a pressure he described as “minimal, not much more”.

When Ms Manova put it to him that John offered no resistance, he replied: “I can’t recall”.

Senior Constable Edney defended his actions as justified and appropriate.

Senior Constable McLeod told the court on Monday he had previous dealings with John, who was a known suicide risk – a risk present on that day.

The officer said when confronted, John was aggressive and threatening suicide.

He came at him with his fist raised but missed the punch.

“I was concerned for my safety and safety of other members,” Senior Constable McLeod said.

He sprayed John with pepper spray to subdue him so he could be arrested but he resisted forcefully.

He sprayed him a second time as he was on the ground, telling him “It smells good doesn’t it?”

Senior Constable McLeod said on Monday he regretted his choice of words.

“It wasn’t done with malice, it was a tactical option and a complete and utter poor choice of words,” he said.

He defended his use of force as reasonable and necessary, given the potentially volatile situation, which also included John possibly grabbing an officer’s gun during the ordeal.

Senior Constable McLeod said he considered the operation successful as no one was injured.

The hearing continues on Tuesday.

Credit:Matt Golding Businesses and residents on Mount Buller were advised on Thursday afternoon that increased …