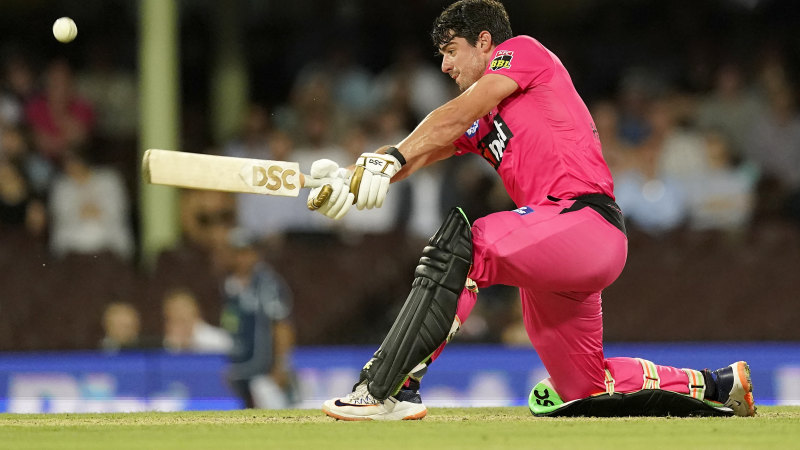 The catch was extra impressive given Henriques smashed his jaw during a high-speed collision in the outfield playing for Surrey five years ago in the English domestic Twenty20 competition, and admitted to thinking about that moment ”every time the ball goes up in the air”.

The Sixers are back into second spot on the ladder and welcome the return of Aussie master blaster Smith for Thursday night’s clash against AB de Villiers and Chris Lynn’s Brisbane Heat at the Gabba.

Paceman Josh Hazlewood then returns for the Sixers on Saturday at the SCG for the final-round clash against cellar-dwellers the Melbourne Renegades.

“That win gives us a bit of breathing space on the ladder,” Henriques said.

“I’m just happy and pleased with the way we played and how our bowlers bounced back tonight.

“Despite some clean hitting, I thought it was just a bit over par, especially given we batted the first three-and-a-half overs not knowing it would be a 14-over game.”

But Henriques and Englishman James Vince, who finished unbeaten on 41 runs off 22 balls, put on a match-winning 114-run stand that thrilled the crowd of 15,643 fans.

Henriques enjoyed himself when he launched Nepalese spinner Sandeep Lamichhane deep into the Bill O’Reilly Stand off successive deliveries.

The more Henriques and Vince got settled, the quicker the Stars attack started to loose their cool.

Little Lamichhane gave up 24 runs for his final over while Lance Morris was even worse, smashed for 26 runs in the Sixers’ penultimate over.

As long as there is Stoinis the Stars are always in with a massive shout. He made it to 62 – his fifth half-century of the tournament – before Henriques chased hard and let everyone know inside the historic ground he had the catch covered.

The defeat was just the Stars’ second this season. But they have an embarrassing habit of reaching the Big Bash finals and choking – a trend that will be a huge talking point in the next few weeks.

The Sixers, on the other hand, have a nice sense of timing about them, not to mention some top-quality cavalry about to return. Apart from Smith and Hazlewood, Sean Abbott, the consistent wicket-taker who has been sidelined with a side strain, is also expected back next week.

Left-armer Ben Dwarshuis (2-20) had Glenn Maxwell ducking for cover and deserved special praise, as did Tom Curran who gave up just four runs at a vital stage of the Stars’ innings, and forced Stoinis to go after Lyon the following over before skying the ball to Henriques.

Curran, the gutsy all-rounder who departs after this weekend’s game against the Renegades for England white-ball duty, was on a hat-trick in the last over.