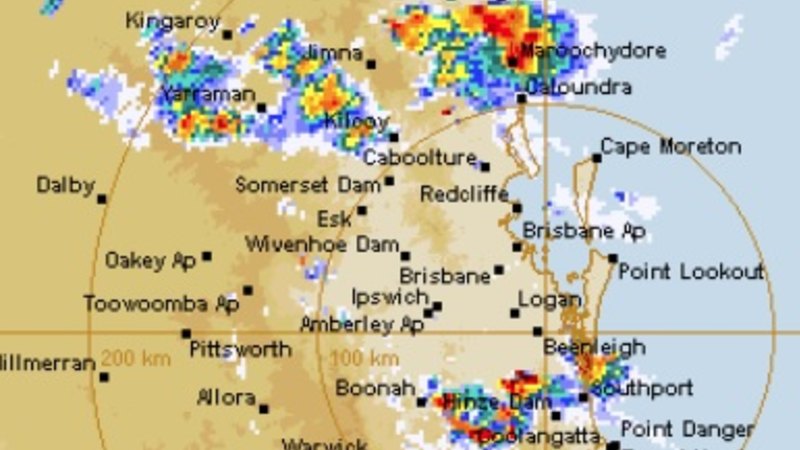 Some 16,031 customers in areas including the Sunshine Coast, Brisbane City, Somerset Regional and Scenic Rim Regional councils were still being affected by power outages after 9pm.

In terms of rainfall, Wappa Dam recorded 60 millimetres and Nambour had 59 on the Sunshine Coast, Nindooinbah in the Scenic Rim received 41 and Mount Binga near Toowoomba saw 27. Nowhere in greater Brisbane recorded more than 25 millimetres.

Trains also had problems with 30-minute delays on the Caboolture, Sunshine Coast, Shorncliffe, Redcliffe, Ipswich and Springfield lines due to power outages throughout Tuesday evening.

Overnight on Monday, the mercury in Brisbane dropped to about 25 degrees, but moisture in the atmosphere left it feeling above 30.

Bureau forecaster Rosa Hoff said a high-pressure ridge over the Coral Sea was driving the “tropical” heatwave conditions across most of the east coast.

“While we’re going to have some warm days as well, particularly down in the south-east corner, it’s that lack of overnight relief that will really be making the difference,” Ms Hoff said.

The apparent temperature at midnight in the city was almost 32 degrees, with humidity remaining in the 80 per cent range until 6am. When the actual minimum temperature of 25.6 degrees was reached at 5am, it still felt like 30 degrees.

Highs of 35 degrees were predicted for Brisbane on Tuesday and Wednesday before dropping closer to 30 degrees at the weekend. Minimum temperatures of about 25 degrees are expected to remain into next week.

Day-time maximums were tipped to hover about 30 degrees on the Gold and Sunshine coasts, with Ipswich and the Lockyer Valley edging as high as 37 degrees into Friday.

Any potential storms would offer a short reprieve from the muggy heat, Ms Hoff said.

It follows a weekend of wild weather and storms which swept through the region on Monday afternoon, causing lengthy train delays and power outages.

Trains on three lines were suspended after a weather-related signal fault, while almost 20,000 Energex customers were left without electricity at the peak of the blackout.

Queensland Fire and Emergency Services received 62 calls for help during the storms, which dumped up to 67 millimetres at Rochedale South, near Logan, and 50 millimetres at Wacol.

Ms Hoff said the shower and storm activity would remain patchy as it pushed west with a surface trough.

“However, as we head out further west that rain will be higher up in the atmosphere, and there’s less of a chance it will be felt as higher totals close to the ground,” she said.

After significant rainfall in the state’s south west last week, the first flood warning since May last year was also issued by the bureau on Tuesday.

Minor flooding was expected on the Paroo River at Caiwarro, south of Charleville, on Wednesday or Thursday, which could rise further with showers and storms possible over the catchment later this week.

Previous Rabada to clean up act after Test ban
Next What’s that in cubits, Tom?