There was no trophy for 1979 women’s champion 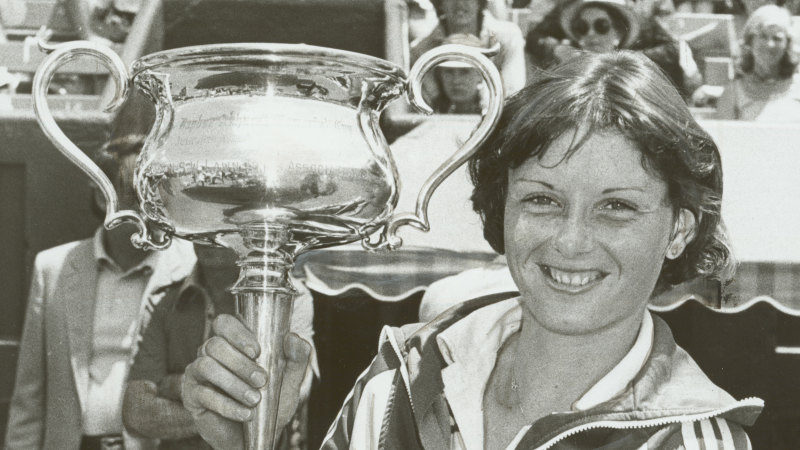 But with the tournament starting, it has been overshadowed by the devastating bushfires that have ravaged the continent.

Years ago players often dismissed the tournament because, until 1987, it was held over the Christmas and New Year’s holidays; they passed on the extended flight to Melbourne in favour of time at home.

‘‘I have a big family, and Christmas was important to us,’’ said Chris Evert, who lost to Evonne Goolagong in the 1974 final and didn’t return until 1981.

‘‘And back then, the grand slams didn’t hold the importance that they do today. It was all about the Virginia Slims tournaments, about us building a tour and proving ourselves. For us, it was more important to win 10 tournaments a year rather than one grand slam. Now it’s the opposite.’’

For Jordan, a three-time All-American at Stanford, being away from her suburban Philadelphia home during the holidays was not such a big deal, especially because in those days, players stayed with host families while on the road, so she knew she would not be alone for Christmas dinner.

Despite losing early at Roland Garros, Wimbledon and the US Open in 1979 and being ranked No.68 in the world, Jordan was optimistic about the Australian Open. The year before, Chris O’Neil of Australia, ranked No.111, had captured the title over Betsy Nagelsen of the US.

‘‘I had only recently turned pro, and the year before I had taken Martina [Navratilova] to three sets in my first Wimbledon,’’ Jordan said. ‘‘That was the only set she lost that year on the way to her first Wimbledon title. So I liked my chances at the Australian, which was also played on grass.’’

There were only 32 women entered in the Australian Open singles in 1979 – compared with the 128 draw this year – and Jordan was the No.5 seed.

After beating two Australians in the first two rounds, Jordan upset the second seed, Hana Mandlikova, a 17-year-old Czech who would go on to win the title the next year, and in 1987, and become a future hall of famer.

Jordan then outlasted another Czech, the No.3 Renata Tomanova, before beating a fellow American, the fourth-seeded Sharon Walsh, 6-3, 6-3 in the final.

‘‘To be honest, I don’t remember anything about that match,’’ said Mandlikova. ‘‘I guess I don’t want to remember.’’

For Jordan, the win was one for the ages, especially because it was the only singles title she won. She played the Australian Open only one more time, losing in the first round to Mandlikova in 1983, and never again advanced beyond the third round at a major. Her highest career ranking was No.37.

For her win, Jordan received $10,000 in prizemoney, in contrast to the $50,000 awarded to the men’s singles champion, Guillermo Vilas of Argentina.

Jordan can take pride that she is just one of seven American women to have won the Australian during the Open era dating from 1969. The others are Navratilova, Evert, Monica Seles, Lindsay Davenport, Jennifer Capriati and Serena Williams.

Jordan, who recently retired as an attorney for the city of San Jose, California, said she had not been back to Melbourne since 1983. She has attended Women’s Tennis Association reunions in the United States and, as a former member of the WTA’s board of directors, she has been involved in helping the organisation set up a pension fund for the game’s earliest pros.

Jordan does not dwell on her lone major title and, in fact, rarely tells friends and colleagues about it because she does not want to brag. She jokes that she used to be the answer to a trivia question at an Australian bar. Anyone who could identify her as the 1979 champion would win a free drink. She said hardly anyone did.

Several years ago, Jordan watched on television as a parade of former champions was honoured on court and realised that tournament organisers had forgotten to invite her. She was not happy.

Then, three years ago, she learnt Diane Evers of Australia and Judy Chaloner of New Zealand, who won the women’s doubles title in 1979, were presented with championship plates by Tennis Australia. Last year, the women were invited by Tennis Australia to attend the tournament. Jordan is still waiting for her invitation.

Once she realised there were replica trophies being given out, Jordan contacted tournament director Craig Tiley, to see if she could get a memento. She said Tiley responded by email, saying he would look into it and get back, but he never did. He did not respond to several requests for comment.

Jordan recognises that her request is trivial compared with what the country is dealing with.
‘‘The images of what is going on there now are utterly heartbreaking,’’ she said. ‘‘I hope they have rain soon to get some relief from this incomprehensible tragedy.’’
– New York Times

Previous Levi to join Manly this week after parting ways with Knights
Next Victory ease past Bali, face trip to Japan for final ACL qualifier