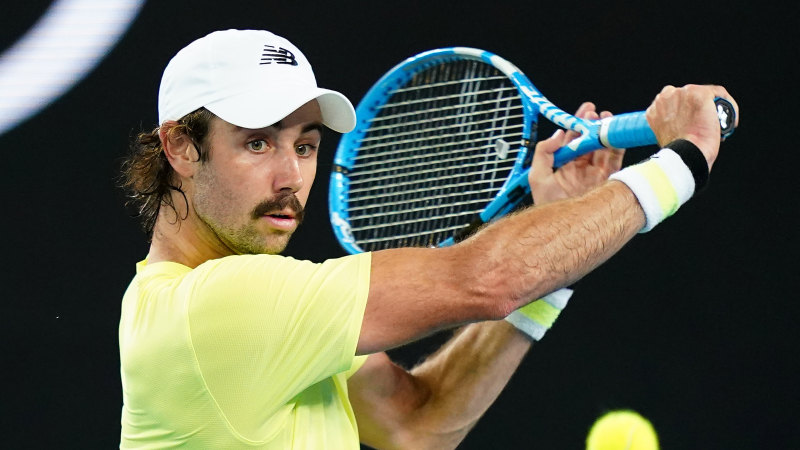 Fabio Fognini holds serve to love and leads 5-4 in the fifth on serve.

Two approaches to the net have helped Jordan Thompson not only avoid being broken but to hold serve.

“His willingness to go after the first ball, take control of proceedings worked in his favour,” the Channel Nine commentator said.

Jordan Thompson was awarded the first point of the eighth service game after his serve was successfully challenged.

But Fabio Fognini wasn’t happy Thompson got the point, arguing the umpire’s call of ‘out’ influenced him in not being able to return the serve. It was to no avail, with Thompson’s point upheld.

Frustration is getting the best of Fabio Fognini, who has punched his racquet for a second time this tournament.

He lost his cool in his first-round match and again here in the fifth set during Jordan Thompson’s service match.

“Erratic is what he was to close out that game,” the commentator said of three loose shots by Fognini to allow Thompson to hold serve at 3-3.

The fifth set remains on serve after Fabio Fognini held at 3-2, but commentator Roger Rasheed says Jordan Thompson’s net play could be defining.

“He’s getting rewarded virtually every time he ventures into the net,” Rasheed said, as Thompson took a point off his Italian opponent.

A backhand winner to hold serve by Jordan Thompson has lifted the Margaret Court Arena crowd to its feet.

The Aussie was staring at 0-30 down, but hit two beautiful winners among four straight points to hold serve at 2-2 in the fifth set.

Both Jordan Thompson and Fabio Fognini are leaving nothing in the tank with their low-percentage winner attempts, with the Italian holding serve comfortably at 2-1 in the fifth set.

Fognini hit a beautiful forehand winner during the game to keep the upperhand.

Jordan Thompson has wasted no time in his reply, holding serve to love.

This match has now ticked just over three hours.

First blood in the fifth set has gone to the Italian 12th seed Fabio Fognini, against Aussie Jordan Thompson.

Jordan Thompson is riding a wave of momentum into the fifth set.

Fognini is seeded 12th at the Australian Open, while Thompson, 25, is ranked 54th in the world.

Thompson has never reached the third round of an Australian Open.

Previous West Gate Tunnel in limbo as government, companies argue over contaminated soil
Next Free child seat checks: can we get a steam clean too?