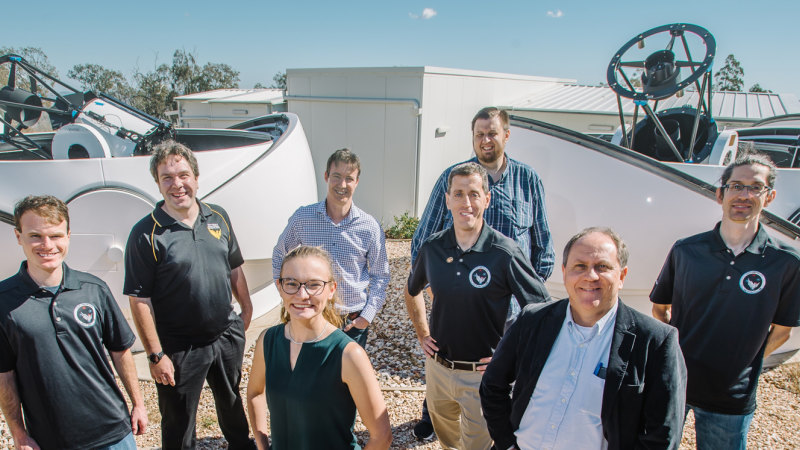 “When a planet reaches a certain mass it gets large enough to start accreting material from the surrounding area, which causes the planet to grow very rapidly, so it will go from Neptune-sized to Jupiter-sized and even bigger within a few million years,” Dr Addison said.

“But in this case we think something must have stopped the planet gaining the extra mass.”

Dr Addison said they believed the planet’s sun itself might be the culprit, with TOI-257b very close to its star, which is several times larger than our own sun.

It is so close its “year” is only 18 days long, and its surface is superheated to at least 1300 degrees.

And fellow USQ astrophysicist Professor Jonti Horner said its proximity meant its size was likely being directly affected by the star.

“Maybe this planet was once a bit more massive and it was whittled away by the star,” Professor Horner said.

“This star is 3½ billion years old and it’s nearing the end of its life, this planet would have been orbiting it for most of that time, and it’s likely it’s been carving off mass from the planet slowly that whole time.”

The scientists believe there is another planet in the same system further out from the star, and they will do more passes using Minerva-Australis in the near future to confirm its existence and make-up.

The telescopic array is part of the network of telescopes around the globe supporting NASA’s Transiting Exoplanet Survey Satellite (TESS), which spots likely exoplanets and passes the co-ordinates to Earth-based telescope arrays for further study.

The discovery of TOI-257b is the 19th exoplanet discovery the USQ team has assisted with, but the first on which they have taken the lead.

“I think it’s quite exciting because Australia is involved in this cutting-edge astronomy,” Professor Horner said.

“But not only that, it’s great for children living in Chinchilla or Charleville or somewhere who think that astronomy and science is something people from the big cities do.

“To see this awesome discovery is being made with equipment based in south-east Queensland, that shows kids a route to getting involved with this themselves.”

‘Ghost town’ at voting booths while ECQ is bombarded with calls

About 1.8 million people had already voted or made arrangements to do so ahead of …