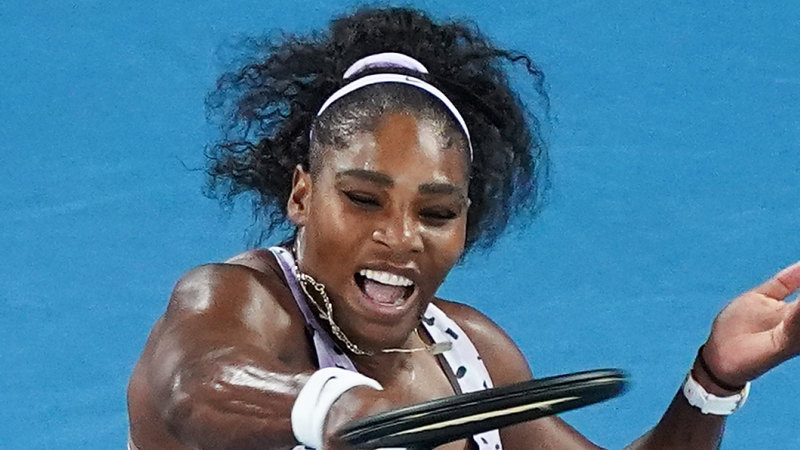 Williams said she had to battle through “personal problems” in the match.

“I was making a lot of errors. Definitely probably the most errors I’ve made since the start of the year,” she said.

“It’s definitely pretty deep. It has to be motivating but also realistic. Sometimes you just miss some shots, you don’t know why. Just trying to find an answer.

“That’s what I kept doing. Thankfully I was able to find an answer in the middle, right in the middle of the second set.”

Williams may technically be a “post-prime athlete” given her age but she is still capable of putting players to the sword with her irrepressible combination of power and aggression. Even when she is erratic, like in this match’s second set, she is a force.

The fairly diminutive Zidansek stood closer to the baseline than seemed advisable to give herself a chance to get to Williams’ serves before they moved wide out of her reach. The tactic of smothering the serve would have been helpful had it not been for the speed of Williams’ serve, meaning Zidansek had to sacrifice reaction time to make sure she wasn’t passed.

There was little relief for the Slovenian world No. 70 whose previous best result in a grand slam was making the second round of Wimbledon and the Australian Open in 2019.

Under the onslaught, however, she did the best that she could despite the scoreboard suggesting otherwise.

Bereft of the firepower to match Williams she tried to be as crafty as she could and increasingly imposed her style on proceedings. It could be read that it was only when Williams misfired that she asserted herself, although it could be argued Zidansek’s craftiness caused Williams’ erratic play.

This meant it wasn’t a perfect night by any stretch for Williams – she had hit 26 unforced errors halfway through the second set – and after hitting a winner at that point she screamed loudly, very loudly, letting out a lot of frustration.

After 10 missed break points in the match, Williams got the most important one in the seventh game of the second set to go up 4-3, and move on to win the set and match from there.

Williams will play China’s world No.29 Wang Qiang in the third round on Friday. Qiang broke through at the 2019 US Open where she made the quarter finals.

Previous Federer wins with ease, sets up clash with Australian nemesis Millman
Next Lessons from Auschwitz: ‘Never again’ is now