Tips and race-by-race preview for Tamworth on Thursday

admin January 22, 2020 Sport Comments Off on Tips and race-by-race preview for Tamworth on Thursday 65 Views 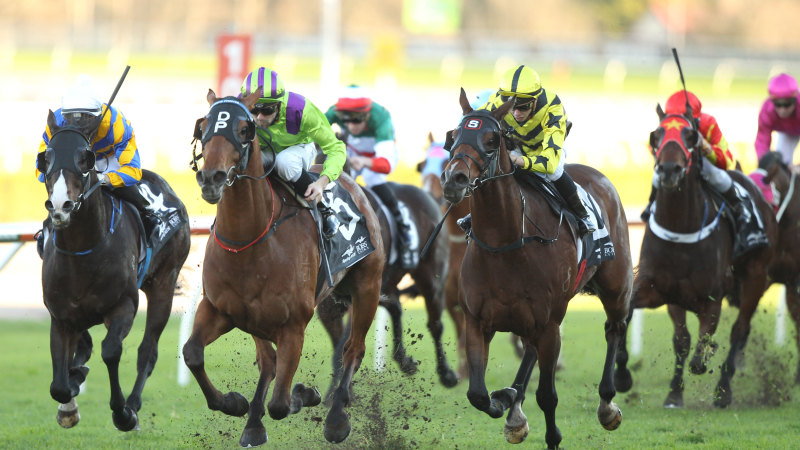 How to play it: Uprise to win
Odds and Evens: Split

Battle of tactics and tempo over the mile. Improving 4YO Cessnock mare 5. Celabitofkandi looks ready to peak fourth-up and staying at the mile. Finished nicely from well back in a better maiden at Taree, and bred to get over further.
Dangers: Local 4YO gelding 1. Hardyo has been consistent enough right through this prep, and is the quality runner just missing in his last couple as a well backed favourite, but drawn the extreme outside gate is a query at the price. Rival home track gelding 8. Deeling Us In can bounce back after disappointing in a Class 1 at Gunnedah when easy in betting. Will find this more to his liking, and previous couple hit the line nicely to just miss. Include 3YO Quirindi filly 13. Olympic Flame who needs to improve again in this field, but has been finding the line okay and suited up to the mile.

How to play it: Celabitofkandi each way and box exacta 1,5,8
Odds and Evens: Odds

Even and tough race where the weight spread could be pivotal. Local 4YO mare 2. Hammoon Ballad saves her best for home, flashing late to win a BM66 here two runs back before outclassed in a BM70 at Randwick. Back in right company, and draws to get a nice trail, but weighted to her best.
Dangers: Newcastle 4YO gelding 1. Da Power was good resuming in similar company at Port Macquarie. Proven weight carrier, and is a second-up winner. Not sure the inside draw will help 6YO local gelding 6. Rostam, but his form in and around this distance is sound, and one of the better weighted runners after rider’s 3kg claim. Wyong 4YO gelding Nitride has a tough task from the barrier, but first-up run in a deeper race at Muswellbrook was solid, and so is his second-up form.

How to play it: Hammoon Ballad each way and box trifecta 1,2,4,6
Odds and Evens: Split

There’s probably a few punters still wondering how promising 4YO Scone gelding 2. Free Rider isn’t unbeaten this prep, but bad starts have brought him undone. Both runs at home has made up plenty of ground to just miss, and from a low draw here, only has to jump with them to be the one to beat.
Dangers: Coffs Harbour 5YO gelding 3. Gus Lightning has been placed six times from 11 starts, and attacked the line nicely in two runs back. Draws to park in a similar trailing position just off the speed, and can drive into the finish again. Local 4YO gelding 4. Pass The Card has plenty of ability, but another who doesn’t always leave the barrier well. Has done his best work late in two runs this prep, and can peak now with blinkers on for the first time. Port Macquarie 3YO gelding 7. Stonecold Flex wasn’t far off landing a good betting move on debut finishing hard at home, and should be even better served up to this trip; while improving 3YO Taree filly 13. Atlantic Lite is also suited up to 1200m at third start.

Tricky battle, but keen at the value on 7YO Wyong gelding 11. Scatter Blast who flew home resuming at Port Macquarie in handy Class 3 company, and normally holds his early form. Only won three from 44, but placed a further 18 times, often in stronger fields than this.
Dangers: Consistent home track 6YO gelding 9. Grove Street can make it three wins from his last four. Came from a wide gate to lead and hold them all off in a handy BM 58 at Scone, and hard fit will take some stopping back on his home track. Local 5YO gelding 2. Akecheeta has made great progress this prep landing a dominant win this grade at Quirindi two runs back before sticking on well after leading in a stronger race at Muswellbrook. Will need plenty of luck, though, drawn right off the track.

How to play it: Scatter Blast each way and box exacta 2,9,11
Odds and Evens: Split

Plenty of chances again, headed by 4YO Scone gelding 6. Joey’s Chance who is ready to win after three runs back. Fought on okay in a deeper Class 1 last start.
Dangers: Progressive 3YO Newcastle gelding 2. Reveal The Magic is also knocking on the door after two solid runs this prep. Just needs to get over and find cover from a wider draw. Wyong 4YO gelding 4. Hubble rarely runs a bad one, and drop in weight is useful coming back in trip; while 8YO Wyong gelding 1. Oakfield Jet hit the line hard in stronger grade at Port Macquarie, and is at peak fitness after four runs this prep, although has to overcome a tough gate.

Feature race stacks up nicely for smart 4YO local gelding 3. Ligulate who has a strong fresh record, and trialled nicely. Drawn to get the right run midfield off the fence, and trainer has removed the blinkers. The one to beat.
Dangers: Lightly raced and talented 7YO local gelding 5. Beauty Best also finds a good first-up race off two forward trials, and two of his four career wins have come fresh. Another home track gelding 10. General Scarlet is unbeaten from two starts here, and finished off okay in the deeper BM 81 Sizzler at Muswellbrook. Drawn off the track, but gets in light after rider’s claim. Local 5YO gelding 12. Pat’s Nipper, stablemate to top selection, hasn’t started for six months, but has had two easy trials. Well treated at the weights for a Highway winner, but inside draw is a real query for one who is likely to settle well back in the field. Scone 7YO gelding and perennial back-marker 4. Professor Marx has been finishing hard all prep, and again will be giving them a start, but draws a soft gate to be tucked away, and if the speed’s on he’ll be surging late at big odds.

How to play it: Ligulate to win and quinella 3 and 5
Odds and Evens: Odds

Good quality dash to finish. Keen on another one from leading local stable, 4YO gelding 5. Screen Shot who also comes back from a a good front-running effort resuming in a Highway at Randwick. Gets a vital 3kg claim, and both career wins so far have come second-up.
Dangers: Impressive 4YO Newcastle gelding 1. Magnolia Power has been lumped with a career high 63kg, but his form is strong for this. Won a BM64 at Gosford two runs back, and the third horse from that day has since won, before a tough effort in stronger BM70 metro grade. If he gets cover from an awkward barrier, will be in the finish. Resuming 4YO Wyong mare 7. Dame Kiri is also smart fresh, and looked good winning a recent trial, but will need a tonne of luck from the outside gate. Scone 3YO filly 14. Bellarina Magic also returns off a nice trial on the limit weight, and her two wins from six starts so far both came in weaker grade on this track last winter.

How to play it: Screen Shot to win
Odds and Evens: Odds

Previous Bridget McKenzie’s position is untenable. She must go
Next Synchronised sisters were doing it for themselves