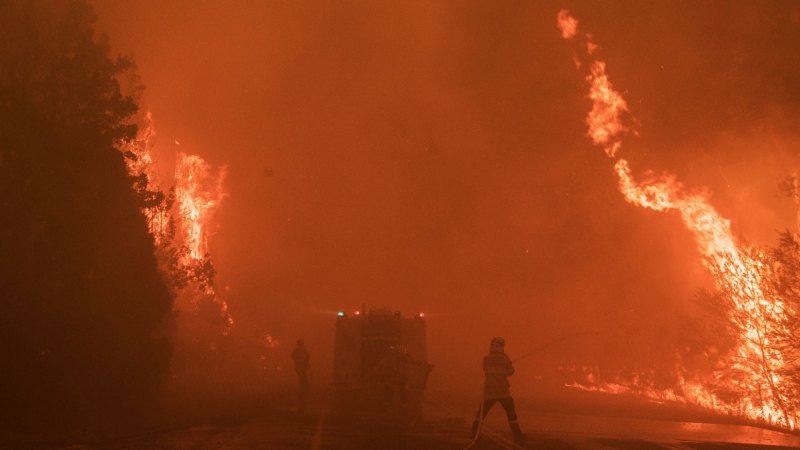 The aim of fire managers is to avoid crown fires during prescribed burning for fear that the fire gets out of control and goes far beyond the area intended to be burnt.

Controlled fires are only meant to stop the odd cigarette thrown out of a car window from starting a fire, or lightning strikes igniting the ground flora. They may not even achieve those goals because scorching the trees above can lead to considerable leaf drop and build-up of litter that increases flammability and deters
germination and seedling establishment.

They could even introduce a new danger. Along transport routes, firebreaks and access tracks, the burnt edges give access to exotic weeds that blow in, especially grasses and herbs from South Africa and Europe. These weeds germinate far more readily than native plants; they are more flammable than the native plants and once they have invaded, they are there to stay.

So, on grounds that they do not stop the progress of wildfires and indeed may lead to weed encroachment, increasing the rate of prescribed burning is no answer to the current wildfire problem.

A wildfire, in its aftermath, will act as an effective deterrent to further fire because no combustible fuel remains. But this is hardly a solution. This inhibitory effect might last for five or so years, but when the vegetation returns it will be able to carry a fire again.

It may seem counter-intuitive but the longer old-growth forests remain fire-free, the less combustible they become. The thicker canopy creates more shade, the undergrowth becomes thinner and less vigorous – and hence there is less fuel for fires.

Ironically, the Australian flora has experienced wildfires of the current type for many millions of years. It is adapted to wildfires, not prescribed burns. Thus, all eucalypts, paperbarks, she-oaks and banksias release their seeds only when their canopies are burnt and there is massive seedling recruitment in the next wet season that ensures the vegetation recovers.

Have no doubt, the vegetation will recover strongly. But with reduced rainfall it will be unusually slow. Ultimately, we are guests in the world’s most flammable continent and have to learn to live with that fact. The Aboriginal inhabitants did, but we have not.

In the long term, prescribed burns do not achieve the goal of protecting life and property. The side effects of climate change will be a period of intensified fire as mean temperatures rise and dry fuel increases. This will be followed later by less intense fire as the fuel load gradually reduces in the presence of lower rainfall.

In the meantime, Australians should expect the worst and plan for more devastating wildfires.

Byron Lamont is a professor in plant ecology at Curtin University, where co-author Tianhua He is a senior fellow.

Previous Free child seat checks: can we get a steam clean too?
Next Sonos drops support for older products, spurring online outcry