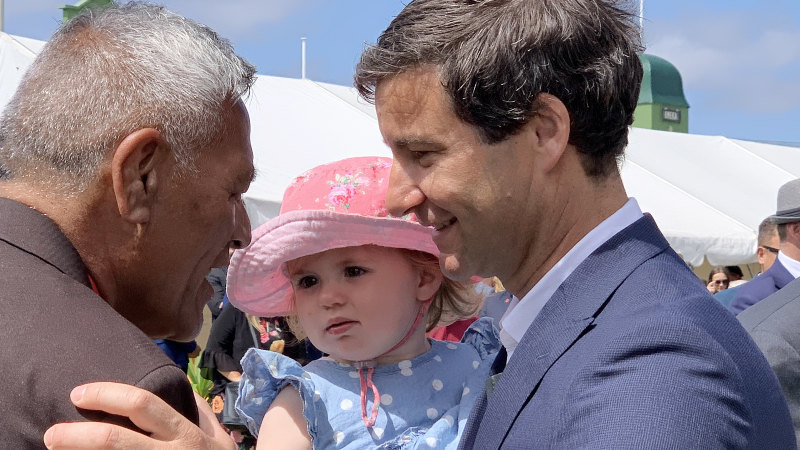 At the event, Ardern was challenged to improve outcomes for Maori as she begins campaigning to return Labour to government.

New Zealand’s political leaders made their annual pilgrimage to the town to address leaders of the Ratana Church, a deeply political branch of Maori Christianity.

Rich with Kiwi-style pomp and tradition, the event marks the beginning of political battle for the year – which in 2020 will climax with an election expected in September.

Opposition and government parties shared a powhiri – or welcoming ceremony – with their hosts, enjoying dancing, singing and speeches and a shared hongi; the iconic Maori greeting.

Ardern was in friendly territory. She was welcomed onto the ground as “our beautiful girl prime minister” by a radio host, who then invited her to dance among schoolchildren for a TikTok video.

The Ratana Church has deep ties to the Labour party, which currently holds all seven Maori electorates.

Opposition leader Simon Bridges, the National’s first Maori leader, joked about the hostilities, saying he wanted to double his party’s voters in Ratana “from one to two this year”.

The alternative prime minister used his time at the microphone to challenge Ardern’s performance for indigenous Kiwis.

“Last year, the Prime Minister said it would be the year of delivery for Maoris. She said to hold her to account for that,” he said.

“She said that unemployment … poverty and inequality between Maori and pakeha [white New Zealanders] would fall. Can anyone show me that?”

Bridges’ address came in a week when new figures showed a modest rise in unemployment and an increase in those seeking welfare and hardship grants.

“You know who the worst affected are by those statistics … they are disproportionately Maori all over this country,” he said.

“What have Labour done? Their hands are soft like they have been using Palmolive.”

Ardern said she would proudly “stand not on the texture of our hands but on our record”.

“We have some of the lowest Maori unemployment in a decade. Wages for Maori going up. More Maori in apprenticeships,” she said.

“Is there more to do? Yes. But we have a record that I’m proud of and I’m incredibly proud of the Maori MPs we have.”

“Simon Bridges understood and discovered his Maoridom and Maori background in the same way that Columbus discovered America. Purely by accident,” he said.

“What’s his lineage? His background? His years of working for Maori affairs?

Ardern was given a rare honour in Ratana, invited to cross the marae to address those assembled from the home side.

She didn’t escape without criticism from Church leaders, with Che Wilson – who is also Maori Party president – asking her to remove arms from police stationed in Maori-dominated suburbs of Auckland.

“We must be treated the same … there should be one law for all,” he said.

“The armed response teams are turning out to [make New Zealand] like America.

“The biggest criminals are usually white males … but the armed response teams single us out because that’s the nature of the bias and the culture of the police.”

Previous No shoes, no shirt, no service: New citizens crack the dress code
Next Deadly powerful earthquake in Turkey felt by neighbouring countries

Footage of police wrongdoing nothing new for African Americans

Since 1619, when the White Lion docked in Jamestown, Virginia and two dozen captive Africans …