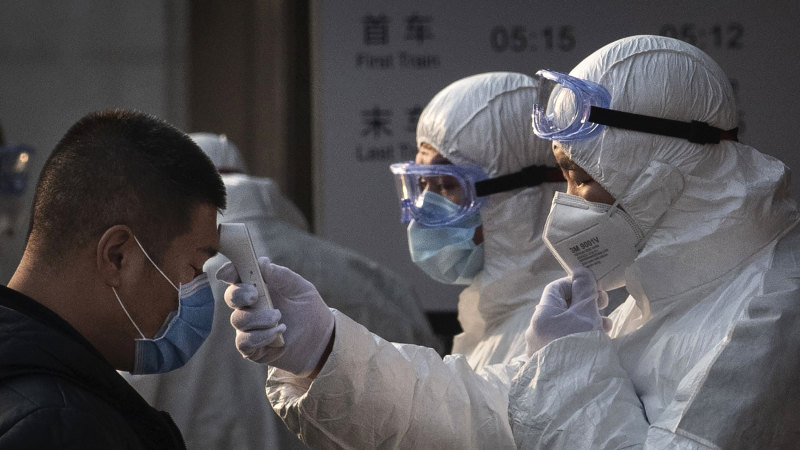 China’s GDP in 2003 is estimated to have been reduced by about one per cent while Hong Kong’s growth rate was lowered by about 2.6 per cent, according to a study co-authored by former Reserve Bank board member Warwick McKibbin.

The SARS virus was relatively short-lived. The first case was notified, belatedly, by China in November 2002 and by July 2003 the World Health Organisation had removed the epidemic alert.

Nevertheless it had significant direct and indirect impacts on economic activity, particularly in China and the wider Asia Pacific region. Even if it isn’t as virulent as SARS, the coronavirus has the potential to have as significant, if not more significant, effects.

The outbreak, which like SARS has coincided with the Chinese New Year, a peak period for intra-Asian travel, has come at a moment of vulnerability for China and Hong Kong, with wider ramifications because of China’s expanded role in the global economy in the years since the SARS outbreak.

China’s economy, weighed down by the trade conflict with the US and China’s own attempts to reign in some of the excesses and excessive leverage within its economy, has slowed to its lowest growth rate in three decades. Last year it grew at only 6.1 per cent whereas in 2002 the economy was growing at around 10 per cent.

Hong Kong, of course, is in severe recession from the impact of the violent mass political protests.

China today is far more important to the global economy – and Australia’s – than it was in 2003. Its share of global GDP has roughly doubled and it is much more connected to the wider Asia Pacific and the world economy than it was then. Nearly a third of our exports are to China.

Thus, even if it turns out that the coronavirus is less impactful than SARS, it may still have material global economic influence and impact the Australian economy at a moment when the global economy is fragile and the bushfires have hurt what was an already-weakening domestic economy.

Whatever the ultimate impact of the coronavirus on China, it will be magnified by the location of the outbreak. Wuhan, one of China’s largest and most important cities, is the capital city of Hubei Province, a key manufacturing, transport and logistics hub.

With the province and its 56 million people effectively in quarantine, the flow-on effects to the wider economy could be very material. Production and supply chains will be affected throughout China.

More generally, such a dramatic step as the lockdown of an entire province during the peak period for travel in Asia will exacerbate fear and exaggerate the impacts on travel and retail spending, with flow-on effects to investment.

Since 2003 China’s economy has evolved to the point where services now represent a majority of economic activity. The biggest impact of the SARS outbreak was on the service sectors of China and especially Hong Kong’s, so the relative economic impact of the coronavirus might be greater than that of SARS.

The impact on travel – and on aviation, tourism and those related sectors, like accommodation and entertainment – will, as the SARS episode demonstrated, be one of the earliest and largest of the adverse economic influences resulting from the virus.

While China-centric travel, in-bound and out-bound, is clearly going to be hit very hard, the SARS episode sent ripples throughout the global market for travel, with people curtailing both business and leisure trips.

Qantas’ share price has fallen more than six per cent in the past 10 days, US and European airline stocks have been similarly battered and China’s airlines have experienced double-digit declines in their share prices.

Oil prices have also fallen about nine per cent in the past week in response to the question mark over the near term outlook for transport and economic activity more broadly.

The eventual casualties – human and economic – of the epidemic will probably depend on the actions the Chinese authorities take. So far they have acted far more speedily and dramatically than they did during the SARS outbreak.

It is conceivable the authorities will also try to blunt the economic impact of the outbreak with some stimulus.

Their ability to do something material is, however, unlike 2003 constrained by the weakness of the economy and their continuing attempts to rebalance and deleverage it while also trying to meet the enormous commitments they have made to purchasing an extra $US200 billion US goods and services over the next two years under the terms of the recently-agreed trade pact with the US.