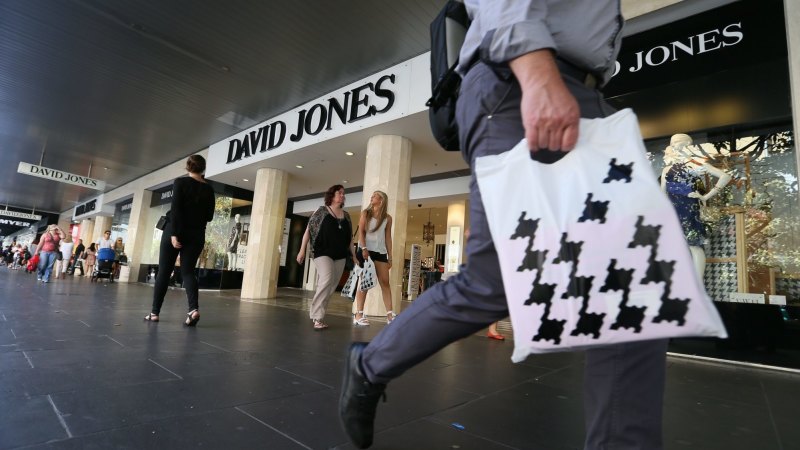 The slowdown in sales hasn’t come as a surprise, with the country’s retail sector rocked by a string of high-profile collapses and store closures in recent months and consumer confidence mired at one of its lowest points since the global financial crisis.

The figures provide more evidence of weaker Christmas sales, with some analysts concerned the success of the Black Friday weekend may have siphoned sales away from the key end-of-year period. Official data on retail sales for December is due to be released in early February.

Despite the dip, David Jones and Country Road’s overall comparable sales were boosted by online sales at both brands.

Online sales at David Jones increased a whopping 61.8 per cent for the half, now making up 10.4 per cent of total sales for the department store. Country Road’s growth was more muted, up 6.2 per cent, representing just under a quarter of the company’s total sales.

‘As the contribution from online sales increases, the reduction of unproductive space remains a priority in David Jones and the Country Road Group.’

Woolworths noted the growth in online sales meant cuts to the company’s retail floor space were still a high priority. At its full year results in August, David Jones chief executive Ian Moir said the company would get “more aggressive” with landlords.

“As the contribution from online sales increases, the reduction of unproductive space remains a priority in David Jones and the Country Road Group,” Woolworths said.

The company said disruptions from its Elizabeth Street refurbishment, which began in mid 2018 and is $20 million over budget, had eased during the half and that it was due to be completed in March, 2020.

The results could spell bad news for fellow department store Myer, which relied on cost-cutting to drive a profitable result last financial year.

Its comparable sales in the 2019 financial year fell 1.3 per cent, with chief executive John King saying the company didn’t “necessarily need sales growth as the prime driver of profitability”.

Previous Hope floats: Inflatable Regatta gets relaunch as storm looms
Next Hot and dry week ahead for Sydney and NSW fire grounds