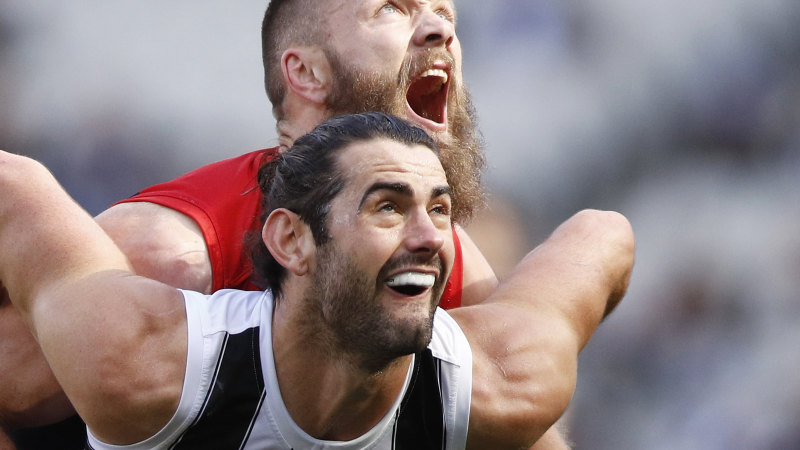 “I look at Buddy’s body now and he might not get to nine or 10 (years). He (Grundy) is 26 (in April) but ruckmen are a different breed and they are only one jump and one bad landing and one knee hit away from not playing for a long time,” Shaw said.

“I would have given him five. That would have been heaps. If he didn’t want it, sometimes you have got to go to the well and (play) hard. He is a good player but the thing about Brodie is that he has become like a midfielder. Have a look at the last couple of premierships that have been won – they (teams) didn’t have a dominant ruckman.

Grundy’s best football is arguably still ahead of him and, with suitors already lining up, including from his home town of Adelaide, and with these offers set to escalate this year, because he could have explored free agency after this season, the Magpies had to ease their usual stance of not awarding long-term deals. The club had originally not wanted to offer more than five years.

“Good luck to him. I have no worries about him. He is a ripper but, to me, you are one jump, you are one contact, you are one bad fall away from doing your knee as a ruckman,” Shaw said.

“You are in a higher stress area than any midfielder that I know. That’s why I wouldn’t go there. He has got to play until he is 33. He has taken a lot of work already, so his body is probably an older body for his sizing and the age.

“But they (Magpies) are in the (premiership) window and they probably wouldn’t want to lose him over the next two years. They are paying overs for three years and hoping nothing happens in between.”

Grundy will earn in the region of $1 million a year, making him one of the highest-paid ruckman in the game’s history.

The specifics of the contract have not been divulged but the Magpies could face a salary-cap squeeze this year for Jordan de Goey, 24 next month, and Darcy Moore, who recently turned 24, are also off contract. Skipper Scott Pendlebury is also be chasing a new deal.

Grundy has been instrumental in the Magpies’ resurgence over the past two seasons, having claimed successive best-and-fairest awards, and he will need to be again this year as they seek redemption for a shock preliminary-final defeat to Greater Western Sydney.

“We lost a grand final and a preliminary final but we should have won the preliminary. As a matter of fact, that last seven minutes of ruck work (against the Giants), it wasn’t his (Grundy’s) fault, but the organisation around the ruck work was horrible and there was probably a lack of leadership in those last seven minutes,” Shaw said.

“I felt worse after the preliminary final loss last year than what I did in the grand final the year before.”

Previous Berkeley University apologises for listing xenophobia as ‘common reaction’ to coronavirus
Next Daniher back from Ireland, playing return unclear